The neighbourhoods of Chacarita, Colegiales and Barracas are the Argentine capital’s most exciting hidden corners to explore. Travel writer Sorrel Moseley-Williams tells us why. 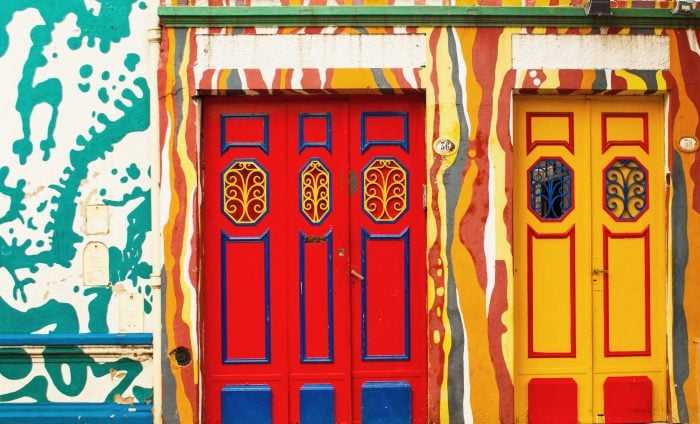 While Palermo, Recoleta and San Telmo feature on many Buenos Aires bucket lists, these are just three barrios out of 48 in Argentina’s sprawling capital. Adventurous visitors looking for pastures new to eat, drink and traverse should explore Chacarita, Colegiales and Barracas, edgier districts offering alternative doses of history and culture.

Meaning ‘little farm’, Chacarita is home to the Chacarita cemetery, an often-overlooked gateway to the next life that’s just as architecturally stunning as Recoleta – and a lot more peaceful. Surnames might not be as instantly recognisable as they are in its swankier counterpart, but rest assured that Argentina’s artistic great and good – such as tango pianist Osvaldo Pugliese and artist Benito Quinquela Martín – have been laid to rest in stunning mausoleums.

Chacarita is also home to the Simik photographic museum, a quirky bar notable that falls under a city government protection order for its historical value and admirable collection of photographic memorabilia.

El Galpón, a twice-weekly organic market, is one of Buenos Aires’ most long-standing such fairs, helping the neighbourhood to retain its moniker, opening Wednesdays and Saturdays to sell fruit, veg, dairy produce, meat and the like. Drop by at weekends for an organic choripan [grilled sausage sandwich].

A different style of market that takes place every Sunday deals in antiques and bric-a-brac. Held around the edge of Parque Los Andes by Corrientes and Dorrego streets, browse through English tea services, second-hand clothes and rusty tools – before naming your best price.

As one of Buenos Aires’ most aesthetically pleasing barrios thanks to charming architecture, converted silos and cobbled, tree-lined streets, well-heeled Colegiales has gained hipster points since it became the city’s official audiovisual district. One AV hub in particular is El Dorrego [located at Zapiola 50], a vast and multi-faceted complex used for filming and screening movies; it also hosts the annual Masticar food fair in April, as well as Buenos Aires Market.

One of Argentina’s favourite cartoon characters, created by illustrator Quino, has a square named after her, and it’s in Colegiales: Plaza Mafalda is adorned with signs featuring the philosophical little girl and her chums.

The picturesque barrio is a start-off point for Graffiti Mundo’s vibrant street art tours. Creative collectives, as well as solo artists, usually liaise with home owners before stenciling or spray painting a façade, giving their work a level of appreciation not often seen in other parts of the world; check out the Edesur power station on Zapiola and Matienzo. Espacio Colegiales is a more pristine gallery that features illustrations, sculptures, digital art and textiles by local artists.

Refuel at an assortment of cool cafés; Colegiales holds them in spades. For a caffeine hit and a lovely bit of cake, the following have been taste-tested: Almacén La Trufa, Bardepán (Arredondo 3486); and Loreto Garden Bar [lunch only].

With several notable puertas cerradas in the ‘hood, be sure to reserve ahead of time at Treinta Sillas and Almacén Secreto Club for intimate dining experiences. Craft beer awaits at Buena Birra Social Club, also reservation only. And, Astor Bistro’s paired market tasting menu is also worthy of note.

Originally slave quarters, built alongside the River Riachuelo in the 18th century, Barracas was also the neighbourhood of choice for Buenos Aires’ richest families – until yellow fever struck in 1871. While the intervening years ensured a working-class, Italian-heavy population, Barracas is back on the up: five years ago, the local fish market was restructured to become the CMD [Metropolitan Design Centre]. This cool urban-design space – Latin America’s largest – has encouraged artists and designers to set up workshops and studios within the complex, generating both jobs and creativity.

The former El Aguila chocolate factory turned Easy – the local equivalent of Ikea – is another show of gentrification. Regardless, the eagle after which it’s named still perches proudly on top of the main entrance [located on Brandsen and Herrera streets].

Pick up a map from the CMD which highlights local landmarks and murals around Barracas. The pink train station is a few blocks away, one location for Fernando Solanas’ 1988 film Sur, which saw him win best director at Cannes that year. Also close by is El Regreso de Quinquela [on Lavadero and San Antonio streets], a mural by Alfredo Segatori in tribute to La Boca-born artist Benito Quinquela Martín.

Lanín Street is home to a different kind of mural. Two blocks of cool urban art designed by local resident Marino Santa María incorporate bright mosaics that glisten in the sunlight, and every façade has a different hue and personality.

Steeple gazers will also be in their element: the twin towers at Santa Felicitas church house tunnels and a hidden temple.

Barracas has quite the lion’s share of bares notables and four of the best taverns are tango haunt Los Laureles, El Progreso, El Puentecito [Lujan 2101], and El Vulcano [Bolivar 1779] for its lunch specials. While the very lovely Parque Lezama is on the San Telmo-Barracas border, it’s worth visiting given that it offers welcome respite from the urban jungle. Plus, the nearby Caseros Street is home to delightful bistros Hierbabuena and Caseros.