The Indian Ocean is an azure-blue expanse strewn with startlingly beautiful islands that live up to all the clichés of swaying palm trees and white-sand beaches – but let’s assume you already know that. Why else should you fly off to these exotic shores? From wildlife to culture, there is more to the Indian Ocean than world-class beaches and Royal-favoured private island resorts…

The Seychelles is not a typical beach destination. That’s not to say it doesn’t have fabulous beaches – in fact, Anse Lazio (below) on the island of Praslin is often considered to be one of the finest beaches in the world. But the appeal of the Seychelles goes far beyond its pristine shores. The Seychelles is an incredible spot for wildlife, particularly birds. There are nearly 250 different types of birds including 12 endemic varieties, such as the Seychelles’ national bird, the black parrot, which is found only on Praslin.

The Seychelles magpie robin and the Seychelles warbler were both saved from extinction and are now – although rare – not considered to be in immediate danger: for achievements like this, the Seychelles is known as one of the most eco-friendly countries in the world. Other animals that live on the Seychelles are giant tortoises (often living to over 100 years old and growing to more than 500 pounds); hawksbill sea turtles; a wide variety of tropical fish like pufferfish and angelfish; and what is thought to be the smallest frogs in the world, the rare Sooglossid frogs, growing to just 9-12mm.

The Seychelles cannot be beaten for sheer luxury, and for those with a large budget, North Island is unbeatable. Having collected several awards for being the best hotel in the world, North Island was also the honeymoon resort of choice for the Duke and Duchess of Cambridge.

Other options include Raffles on Praslin and the Four Seasons on the main island, Mahe. Families will love Denis Private Island. More low-key than the Seychelles, Mauritius is a collection of islands directly east of Madagascar. Not just a cluster of fabulous beaches, Mauritius is also a diverse country with a wide-ranging heritage present in its Dutch fortress and Hindu temples. However, one of the main draws of Mauritius is actually found offshore. Mauritius is a fabulous spot for any water sport enthusiast. Windsurfing and kitesurfing are big in Mauritius, with ocean winds blowing 300 days a year. Learners can head to The Bay, in Le Morne, where the water is calmer. Surfing is epic too and one of the most famous waves is the fast left-hander ‘One Eye’. Shanti Maurice is the top property in Mauritius and one of the best beach hotels in the Indian Ocean. Zanzibar is all about the downtime. The private islands off the east coast of Africa offer privacy and blissful surroundings in which to unwind after a long trip, safari, or just a year in the office. While its beaches are undeniably sublime, Zanzibar also offers a very cool cultural allure. 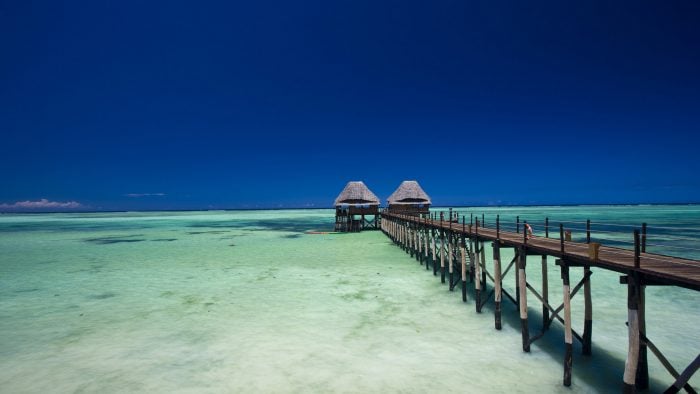 It might not be the first thing you think of when considering Zanzibar, but Stone Town is a wonderful place to sample a flavour of Zanzibar’s past – and what a past. A trading post with African, Arabic, Persian and Portuguese influences, Zanzibar was once home to both the Sultan of Oman and David Livingstone.

Enormous, intricately carved Zanzibarian doors reach imposing heights, and the ancient Omani fort was once the defence of these shores from the Portuguese. Wander through narrow alleys, explore the lively markets and bag yourself some bargain-price saffron: not for nothing was Zanzibar referred to as the Spice Islands. The birthplace of one of the greatest performers of all time – I of course refer to Freddie Mercury – is also home to a fabulous seafood scene. Straight from one of the dhow boats floating on the neon-blue water just offshore, tuna, crab claws and enormous prawns are grilled on open fires by the beach.

One of the best things about Zanzibar? It’s extremely affordable. We love Mnemba Private Island – the ideal spot after you’ve spent a day or two lapping up the history of Stone Town. Want to know which country is fast becoming the next big beach destination? It’s Mozambique – and you should go now, before everyone else does. A little more ‘barefoot-lux’ than its sleeker Indian Ocean counterparts, Mozambique has been busy rebuilding itself after its terrible 16-year civil war, which finally ended in the 1990s.

Now, its dazzling shores are peppered with fantastic lodges and resorts; the Gorongosa National Park (at one time more popular than the parks of South Africa and Zimbabwe combined) is in the process of becoming the wildlife haven it once was; and the country now boasts the largest marine reserve on the continent: the Quirimbas archipelago. The waters around Quirimbas afford spectacular underwater scenes, where unearthly manta rays glide, placid turtles chill, gigantic whale sharks meander, humpback whales breach the surface above the 350-odd species of reef fish, and mangrove forests give way to some of the healthiest coral reefs on the planet. Diving, snorkelling, fishing, kayaking, and dhow sailing trips are the order of the day in this unspoiled part of the world.

Azura at Quilalea is a private island retreat in the Quirimbas archipelago. Part of the island is used as a turtle hatching site and if you don’t dive already, you can learn to do so here with full PADI facilities. Take advantage of the lower prices of Mozambique to stay in divine surroundings – this ‘hidden gem’-quality won’t last long.