A Spiritual Trail Through Southeast Asia

Many people see travel as a way to reflect, rejuvenate and escape the stresses of daily life. Here at Jacada Travel we can ensure you experience all this in complete luxury in one of the world’s most beguiling corners: Southeast Asia.

Regarded as one of Southeast Asia’s most spiritual settings, idyllic Bali is a real escape. This beautiful island boasts impressive yoga hideaways, mind-blowing spas plus an age-old culture of healing. We can take you to renowned sanctuaries strewn across the land before a visit to Ubud to meet and learn from traditional Balinese healers. The spiritual and cultural hub of Ubud is home to some of the island’s most significant holy sites and working temples, including the Hindu Ulun Danu on the shores of Lake Bratan. Further Hindu influences prevail in traditional Manggis, with the extensive Pura Besakih taking centre stage. Lying along the slopes of Mount Agung, this complex features a remarkable twenty temples and shrines, while a trip to the south of the island offers sacred temples such as the cliff-top Pura Luhur Uluwatu and Seminyak’s Tanah Lot. A hop over to Indonesia’s volcanic Java then brings the truly sublime experience of the ninth century Borobudur Temple. This ancient Buddhist structure is not only the oldest, but also the largest on the planet and promises an enchanting encounter. Circled by smouldering volcanoes, the UNESCO World Heritage site is most magical at dawn when you can watch the sun emerge over thousands of relief panels as hundreds of Buddha statues are lit up by the early morning rays. Of all the Southeast Asian countries, Myanmar is one of the most authentic. Having only recently opened its doors to the world of tourism, this extraordinary and unspoilt country is poles apart from contemporary western life. This is a land that teems with thousands of pagodas and monks, with almost ninety per cent of the population practising Buddhism – and it is this fervent religious lifestyle that gives you the chance to deeply immerse yourself in ancient Buddhist teachings. See these spiritual spectacles in magnificent Bagan where a wealth of soaring temples are found along the Irrawaddy River. Or, head to Yangon for the giant showpiece of Shwedagon Pagoda and its sparking tip of diamonds, rubies and sapphires which is best marvelled at sunrise and twilight. Meanwhile a trip to pastoral Pindaya’s enormous limestone cavern opens up a realm of countless nooks and crannies bursting with hundreds of gilded Buddha statues. Crawl through Pindaya Cave’s little chambers and side spaces to discover, and join, pilgrims meditating in search of nirvana for a truly unique and mystical experience. 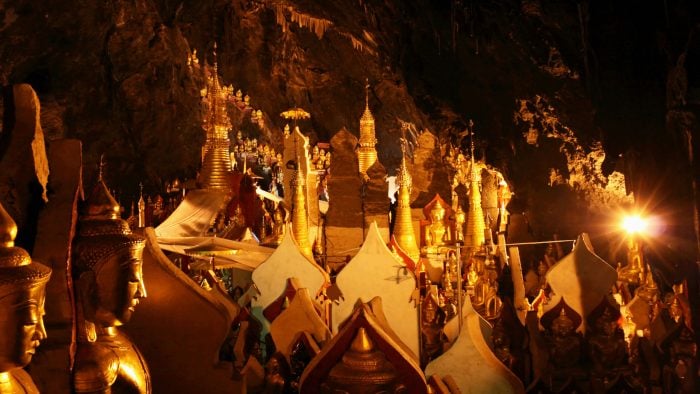 Another exceptional meditation destination is Cambodia’s Angkor Wat. Originally built as a Hindu temple, this UNESCO site became a Buddhist centre and, as the largest religious monument on Earth, is a breath-taking place to meditate among monks, locals and travellers alike. Aside from the evident tranquillity and beauty of these ornate ruins, Angkor Wat also offers an insight into the culture and history of captivating Cambodia. Strolling among these elaborately shaped hallways and shrines, you gain a wider understanding of the Khmer Empire and its success during the ninth to thirteenth centuries. Laos’ neighbours, Thailand and Vietnam, provide even more cultural insights. The former is a melting pot of delicious cuisine, excitement and beaches; however Thailand’s northern city, Chiang Mai, is a hotspot for culture where yoga and meditation flourishes. Calm your mind here at a tranquil sanctuary, talking to monks and learning how they work towards achieving enlightenment. Laos’ other neighbour, intriguing Vietnam, offers further glimpses into this region’s culture and heritage. Wander the once Imperial City of Hue to discover royal tombs, temples and pagodas or visit Hanoi’s French colonial quarter for a wealth of Vietnamese history. While Southeast Asia allows you to detach yourself from the western world spiritually, we can guarantee that you still enjoy all the style and ease of first-rate luxury hotels with sincerely welcoming hospitality. This timeless and spectacular region gives you the chance to unearth a myriad of temples, visit yoga or meditation retreats and delve into the fascinating array of religions and cultures during a compelling journey of spiritual Asian destinations.