Where to Go for Incredible Wreck Diving

There are few experiences on earth more unique than exploring a sunken shipwreck, allowing divers to catch a glimpse of our past in a history lesson like no other. 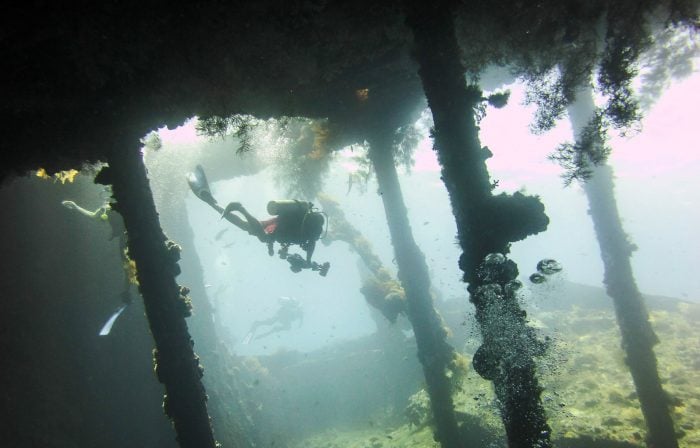 Swim through the remains of Bali’s most famous ship wreck

Located in Tulamben, northeast Bali, the USAT Liberty Wreck is inarguably the island’s most famous wreck dive site. In the 1940s, the WWII cargo ship was hit by a Japanese submarine, but miraculously the captain managed to steer it back onto the beach. Then, in 1963, the volcanic eruption from Mount Gunung Agung caused the ship to move back into the water. Animals that can be seen around the wreck include bumphead parrotfish, barracuda, and even the strange-looking ocean sunfish, also known as mola mola. Malaysia’s wrecks are quite scattered but two areas that are synonymous with wreck diving are Labuan and Tioman. The former is home to four major wrecks (Cement, Bluewater, Australian and American), which are mostly located in Brunei Bay, while the latter has a number of WWII wrecks – such as the British battlecruiser HMS Repulse – but is only suitable for technical divers as these vessels are more than 50 metres deep. This exotic island nation in the Indian Ocean is home to quite a number of ships and boats. Some were deliberately sunk to make artificial reefs, while others have an interesting story behind them. Well-known wrecks include the Djabeda Wreck – a Japanese fishing boat that’s visited by an array of marine creatures, from triggerfish to sharks – and the Stella Maru. The vessel sits upright on a sandy bottom and is still incredibly intact – a great subject for wide angle photography.

No matter which part of Mexico you choose to go, chances are you’re bound to find an exciting wreck to explore. In Playa Del Carmen, there’s Mama Viña – an old shrimp boat that was intentionally sunk in 1995. Over in Cozumel, the famous Mexican navy minesweeper, C-53 Felipe Xicotenantl, lies on the sandy bottom in Chankanaab Bay; the centre and the engine quarters of the wreck are still intact. Further north, several wrecks are in the waters off Isla Mujeres, including Ultrafreeze, The Chairel, and the Hondureo Wreck. Seek out a reef formed by five sunken ships

In Cape Town alone, you could spend days exploring its many wrecks. One of the most popular underwater attractions is the Maori; the ship – which was carrying crockery and explosives – met with an unfortunate accident due to bad weather and sank in 1909. There are also the Smitswinkel Bay Wrecks, a group of five ships that form an artificial reef teeming with all sorts of marine life, from big animals to small critters.

Dive down to see the shipwrecks off Thailand’s coast

Head straight to Pattaya for some of Thailand‘s world-class wreck diving. The HTMS Khram and the HTMS Krut are well-known wreck dives that you can observe in awe, even without exploring further within. The batfish, barracudas, even the macro critters, are amazing sights. The Hardeep Wreck, an 80-metre-long freighter located just off Sameasan, is another noteworthy site. Best of all? Pattaya’s wrecks are very accessible and they’re perfect for divers of any level. Be among the first to discover Vietnam’s wreck diving sites

Plenty of people have yet to discover Vietnam’s underwater world, which makes things even better (no crowds, no fuss). Most of the wrecks can be found around Con Dao, a small group of islands situated south of Ho Chi Minh City. There’s a dive site called Fish Highway, which features a dizzying amount of fish and a steel boat that’s 28 metres below the surface. Grouper’s Grotto is another dive site to check out – at 35 metres you’ll find a large fishing trawler that’s home to massive grouper.