When is the Best Time to Visit Japan?

As a truly year-round destination, the best time to visit Japan depends on what you want to do there.

The most popular times to go are spring (end of March to mid-April), when the cherry blossoms are in bloom, or autumn (November to early December), when the autumn leaves put on another spectacular colour show. But since these times attract the most tourists, you might consider going at another time so if you prefer to avoid the crowds.

So, when's best time for you? That depends heavily on the sort of weather you prefer. Japan has four distinct seasons, with January being the coldest month and August the hottest. In winter snow is common, while summers are hot and humid with tropical storms.

Since Japan is a relatively long, skinny country, weather also varies from place to place – from the frigid northern island of Hokkaido, to the subtropical islands of Okinawa in the southwest. Generally speaking, the south and west tend to be slightly warmer, while the north and east are cooler. Of course, the higher you go into the mountains, the colder it gets.

Read on to discover what you can expect from Japan's seasons, and all the highlights worth travelling for throughout the year.

Lasting from March until May and with temperatures ranging from around 40 to 65°F, Japanese springtime is somewhat unpredictable – so pack for all eventualities! Saying that, skies are usually sunny and rainfall is low (although it can be cool at night).

Famous worldwide for ‘hanami’ (cherry-blossom viewing), spring in Japan could well be one of the most romantic sights you’ll ever see – check out the best time to see cherry blossom below. Thanks to its popularity, though, it’s also the busiest time for tourists.

Domestic travel is at its peak during Golden Week, a run of four national holidays within a week from late-April through to early May. Avoid travelling at this time if at all possible. (Don’t worry, you won’t be missing out on much.)

From mid-May to end of June, there are fewer tourists around and the weather is great, with very little rain. Temperatures start to rise and flowers other than the cherry blossom start to bloom – a sight that’s well worth the visit.

Lasting from June to mid-September (depending where you are), Japanese summers are hot and humid, with temperatures ranging around 70 to 90°F. Saying that, most places in Japan are air conditioned, so the heat is manageable. It’s also much cooler in the mountains, where summer is prime season for outdoor activities like hiking.

At the beginning of summer comes Japan’s rainy season – known as ‘tsuyu’, the plum rain – which starts in early- to mid-June and lasts around a month. Compared to much of Asia, Japan’s rainy season is relatively mild – you might not even get rain every day, and when it does come down it’s not usually torrential.

Summer may be one of the quieter times for tourists, meaning you’re more likely to have the beauty spots to yourself, but it’s pretty lively on the culture front, with plenty of festivals (or ‘matsuri’) filling the calendar. Check out more on this below.

Just try to avoid travelling around mid-August: school’s out and many locals travel over the Obon holiday (13th-15th August).

Autumn in Japan starts in mid-September (although it can still be quite hot in some places) and continues until early December. Weather-wise, it’s a gorgeous time to go, with temperatures ranging from around 50 to 70°F and generally clear skies.

Autumn in Japan is best known for its stunning colours, as the leaves turn all shades of red and orange (known as ‘koyo’). Find out when to catch this natural spectacle below.

Thanks to the beautiful scenes and more pleasant weather, Autumn in Japan is a busy time for tourists. November in particular is a peak time – something to consider if you’re not a fan of crowds.

Starting in December and lasting until mid-March, Winter in Japan is cold and quite dry, with temperatures ranging from around 30 to 45°F. If you don’t mind layering up, winter can be a great time to explore the country without the crowds.

Winter in the mountainous and northern parts of Japan is a bit longer and brings with it plenty of snow – if you’re a keen skier or snowboarder, you’ll no doubt have heard of Japan’s legendary powder. Check out when and where to hit the slopes below.

Meanwhile, in southern and western Japan winter can much milder – and in subtropical places like Okinawa it’s almost non-existent.

If you’re considering visiting around New Year, be warned that since this is an extended holiday period – both in Japan and across the world – it can be quite busy. Added to that, many places are closed from the end of December until a few days into January – although you can still visit most temples and shrines, as well as enjoying the great outdoors, of course. One of Japan's most famous sights, Japan's cherry blossoms bloom from around the end of March to mid-April – also known as 'sakura season'. But sakura bloom schedules can vary year-to-year, depending on temperature, and how long it lasts is a matter of luck – some years the blossoms might stay on the trees for a couple of weeks, while other times they could be felled early by strong wind or rain.

Cherry blossoms usually only bloom for around one week per location, and at slightly different times throughout the country – starting from Okinawa in early-February and moving northward to northern Hokkaido until late-May. Travel south to north to see them for longer, and check out this article to find out the best places to see cherry blossom in Japan.

Thanks to the popularity of cherry blossom season, March and April are peak season for tourists – so book as far in advance as possible. A visit to Japan when the leaves are changing colour is really spectacular. In fact, we think it's one of the best places to spend autumn in Asia – and, thankfully, the autumn leaves tend to stick around for a bit longer than the cherry blossoms.

By late September, the leaves start changing in the North around the mountains, gradually making their way down to the central and southern cities (Kyoto, Osaka and Tokyo) by mid-November and remaining colourful into early December. Bear in mind that the autumn colours tend to peak a bit later than other places in the Northern Hemisphere, with the most spectacular displays often reserved for the end of November and even the beginning of December.

Autumn is the second busiest time of year to visit Japan, so it’s best to book your trip way in advance. Summertime brings with it many of Japan’s best festivals (or 'matsuri) – including Kyoto’s Gion Matsuri, Osaka’s Tenjin Matsuri, Aomori’s Nebuta Matsuri, and the Awa Odori festival in Tokushima on the island of Shikoku.

This season is also renowned for dazzling fireworks displays, or 'hanabi taikai'. Tokyo’s Sumida River Fireworks are particularly deserving of a mention, but there are plenty of events throughout the country. 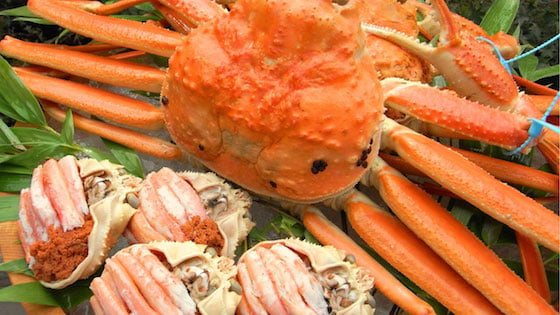 Known as 'echizen', these giant crabs are considered a delicacy and can fetch quite high prices at the fish markets. It's a must-try for foodies – and there are loads of different ways to eat it, from soups to sushi. Harvest season usually begins around November to early December.

Enjoy travelling with your tastebuds? Check out our guide to a foodie vacation in Japan. Japan's ski season runs from late-December until March (and even as late as May in some areas), although the best time to hit the slopes depends where you're going.

Snow usually arrives mid-November on the north island of Hokkaido, with the earliest resorts opening during the third week of that month – Niseko, Rusutsu and Kiroro are usually the first of the big resorts to welcome skiers and boarders.

To experience Japan’s stunning winter festivals – including the well-known Sapporo Ice Festival – visit at the end of January and start of February.

March and April bring great weather with the occasional fresh snowfall, making it a great time both for in-resort and backcountry snowsports. The plentiful early-season snow ensures resort conditions are excellent right until the end of the season and, at this time, the clear weather affords stunning views. 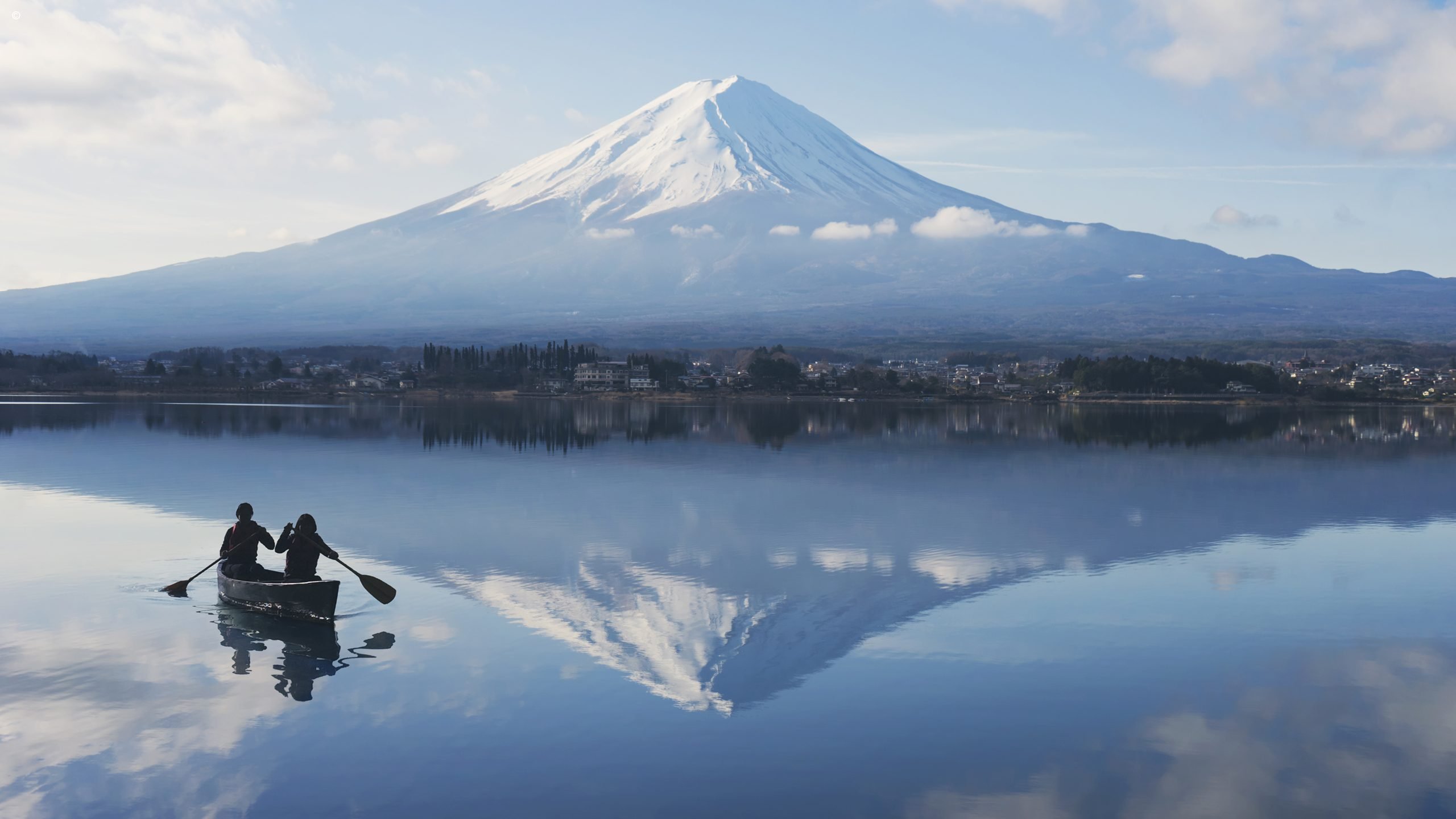 You'd be forgiven for thinking you'll be able to spy this iconic Japanese sight at any time, but in reality the mountain can be hidden behind clouds and haze for much of the year.

While you might get lucky in other seasons, late autumn to early spring (from November to February) gives you the best chance of a clear view. In theory, you might struggle to catch a glimpse between April and August.

Of course (as with all things nature), no guarantee either way!

“Kate and others at Jacada listened when we told them what we wanted to do in Japan. Many of the requests were unusual. Kate made sure we knew what we were asking for and then planned a trip to accomplish it.

Listening is not always something travel planners do. The execution of the trip was flawless. Each guide was not only knowledgeable, but went to great lengths to make sure we were doing and seeing the things we wanted. We have already planned our next trip with Jacada!”

Whatever you want from your trip to Japan, our team of expert travel designers are ready to help.