The Definitive Guide to Gorilla Trekking in Rwanda

There’s something uniquely special about coming face-to-face with an animal that shares 99.6% of our DNA – even more so when there are just 1,000 of them left in the wild. No wonder mountain gorilla trekking in Rwanda is a dream-come-true for wildlife lovers and intrepid travellers alike.

Dreaming of a Rwanda gorilla trip? Here’s everything you need to know about Rwanda gorilla trekking – from where and when to go, to how to prepare and what to pack, to the best place to stay and best trips on offer.

When to go
Mid-December to early February & June to September

Where to See Mountain Gorillas

Mountain gorillas live in just two places in the whole world: Uganda’s Bwindi Impenetrable National Park and the Virunga Massif, a chain of volcanoes stretching 174 miles across Rwanda, Uganda, and the Democratic Republic of Congo.

Thanks to its gentler slopes and more open bush areas, which can make for easier tracking than the other parks in the Virunga Massif, one of the best places to see mountain gorillas is Rwanda’s Volcanoes National Park (or Parc National de Volcans).

If you’ve ever seen the film ‘Gorillas in the Mist’, inspired by famous American primatologist Dian Fossey, you might recognise Volcanoes National Park as the place she conducted most of her research and founded a centre that helped bring the endangered gorillas to the attention of the world. To this day, the park is one of Rwanda’s conservation epicentres and home to the Dian Fossey Gorilla Fund, which continues her legacy of research and gorilla advocacy.

Aside from world-class mountain gorilla trekking, there are plenty of other reasons to visit Rwanda, too. Wildlife lovers won’t want to miss Akagera National Park’s woodland, swamps, low mountains and savannah, which are home to zebras, giraffes, elephants, lions and hundreds of bird species.

How Many Gorillas are in Rwanda?

There are 12 habituated gorilla groups (meaning those accustomed to the reasonably close proximity of humans) – each made of at least one silverback, along with several females and youngsters – in Rwanda’s Volcanoes National Park, as well as a few others that can’t be seen by tourists. This is a sizeable number, considering there are sadly just 1,000 gorillas still living in the wild globally. 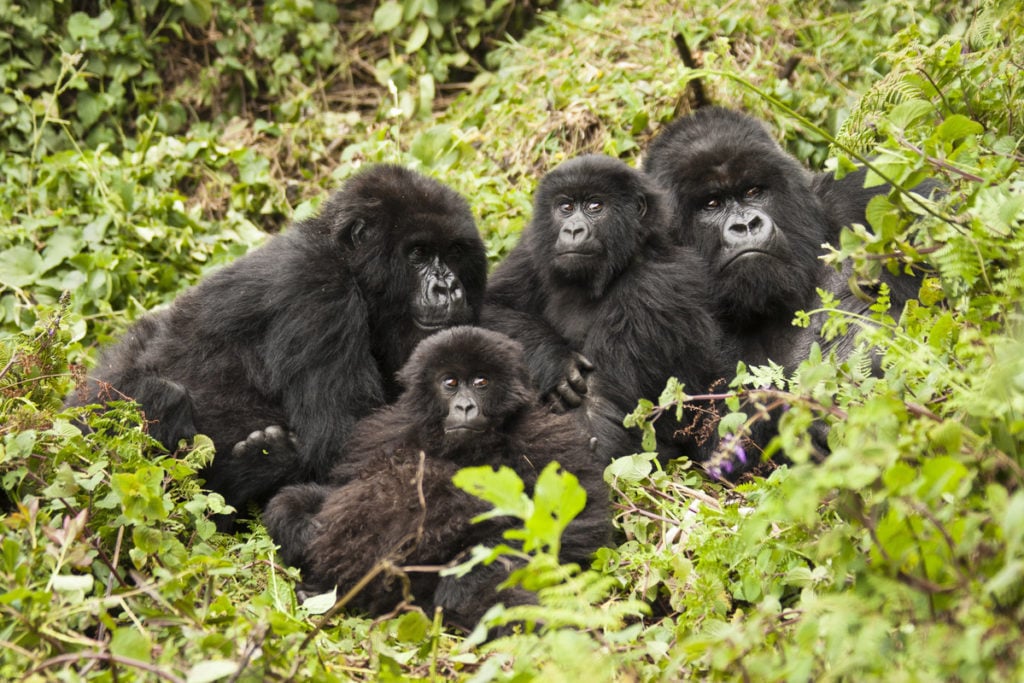 Having only been discovered in 1902, these majestic creatures are now endangered due to habitat loss and global warming, war and civil unrest, as well as disease, hunting and illegal pet trade (despite the fact they rarely survive in captivity). In fact, it was once believed the species could be extinct by the end of the twentieth century.

Yet thankfully, the number of mountain gorillas has actually increased – largely thanks to the stellar efforts of communities, governments, NGOs and even travellers, like you, who’ve helped fund and organise conservation initiatives. But it’s not over yet. It’s crucial the population continues to grow to increase the species’ genetic diversity, or it could still be wiped out completely by anything from a new disease, to a sudden change in habitat.

How to See Gorillas in Rwanda

Since gorilla groups are always on the move, it’s vital to get the help of expert trackers for a chance of seeing them up close. While those you’ll track are habituated – meaning they’ve undergone a several-year process of gradually being accustomised to humans – they are by no means tame! Your guide will carry out a pre-departure brief when you meet (usually around 7am) to inform you of ‘gorilla etiquette’.

There are just eight tracking permits per gorilla family per day up for grabs in the Park (the same as in Rwanda), so planning ahead is crucial. Of course, this means the forest is unlikely to be crowded and you can rest easy knowing the gorillas face minimal disturbance.

Your guide will lead you to the spot where your gorilla family was last seen – which could be just a couple of hours’ hiking, or much further away.

From there, they’ll look for signs of the gorillas – such as footprints, dung, chewed bamboo and celery stalks, as well as abandoned nests – that might lead you to them. Guides and trackers throughout the Park stay in constant contact to make your search easier, but gorillas can cover large distances overnight and no group is easier to track than another, so be prepared for a long day.

You’ll probably smell the gorillas before you see them! Usually you’ll find them scattered over a small area of thick vegetation, during their long midday period of rest and play. With a mature male silverback gorilla weighing up to 200kg, it’s understandable to feel a little nervous upon first sight; but with the expertise of a guide, you’ll feel in safe company.

You’ll be allowed to spend up to an hour with the family – this is to avoid causing the animals any undue stress or getting them overly used to human interactions. Habituated gorillas may observe you with some interest (as will you them!), but inevitably they’ll go about their business and even feed in front of you unperturbed.

It’s important to always stay at least seven metres away from the gorillas at all times – more for their safety than your own, as gorillas are at risk of disease transmission from humans (which could ultimately prove disastrous for an already-endangered species). Find out why we encourage travellers to wear surgical face masks when visiting the endangered mountain gorillas of Uganda and Rwanda.

The Best Time to See Mountain Gorillas in Rwanda

Rwanda has two wet seasons and two dry seasons. The dry seasons, from mid-December to early February, and from June to September, are perfect for gorilla trekking. During these windows, the forest terrain is not as challenging as it often is during the wet months and reduced humidity means fewer mosquitos.

However, because the country lies so close to the equator, the weather can be unpredictable, so it’s wise to pack for any eventuality! Always bring waterproofs, no matter what time of year you visit.

How Hard is Gorilla Trekking in Rwanda?

The clue is in the name: mountain gorillas live in often-dense forests at elevations of between 8,000 and 13,00 feet. For anyone hoping to see them in the flesh, that means there’s bound to be a bit of a climb.

With steep slopes, and dense vegetation, some of the terrain you trek through can be challenging – especially if you’re visiting in a wetter period, when slippery pathways and lush greenery add to the obstacles.

You need to be physically fit to enjoy your Rwanda gorilla trip, because finding the gorillas is also no easy feat – you should expect to trek for anything between two and five hours. At high altitudes (around 2,500-3,000 metres in Volcanoes National Park), you might find this a little more challenging than at home, so it’s worth preparing on the fitness front.

That said, thanks to gorilla numbers and more forgiving terrain, it can be easier to see gorillas in Rwanda than in Uganda. In Rwanda, arrangements can also be made for porters to carry disabled travellers to the nearest gorilla group for an extra fee. If you ask us, this once-in-a-lifetime experience is more than worth the effort. If anything, it only adds to the satisfaction. 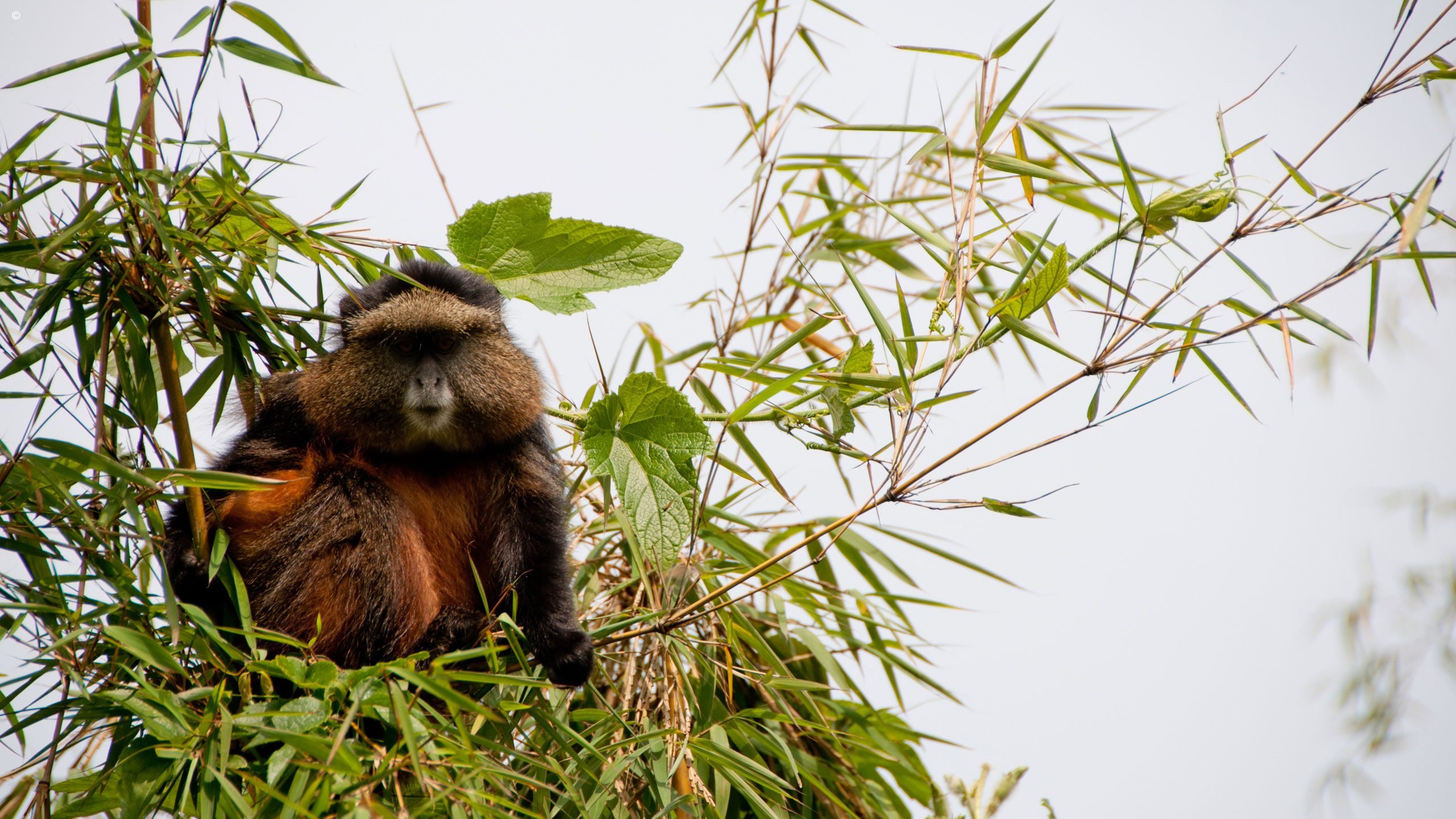 Our five-day Gorilla and Golden Monkey Discovery is perfect if you’re short on time. After a city tour of Rwanda’s capital, Kigali, you’ll be driven directly to Volcanoes National Park, where you’ll have the privilege of private tours to meet both mountain gorillas and golden monkeys. Plus, with four days to explore the Park, you’ll also have the opportunity for other excursions to Dian Fossey’s research station and the beautiful twin lakes, Burera and Ruhondo. 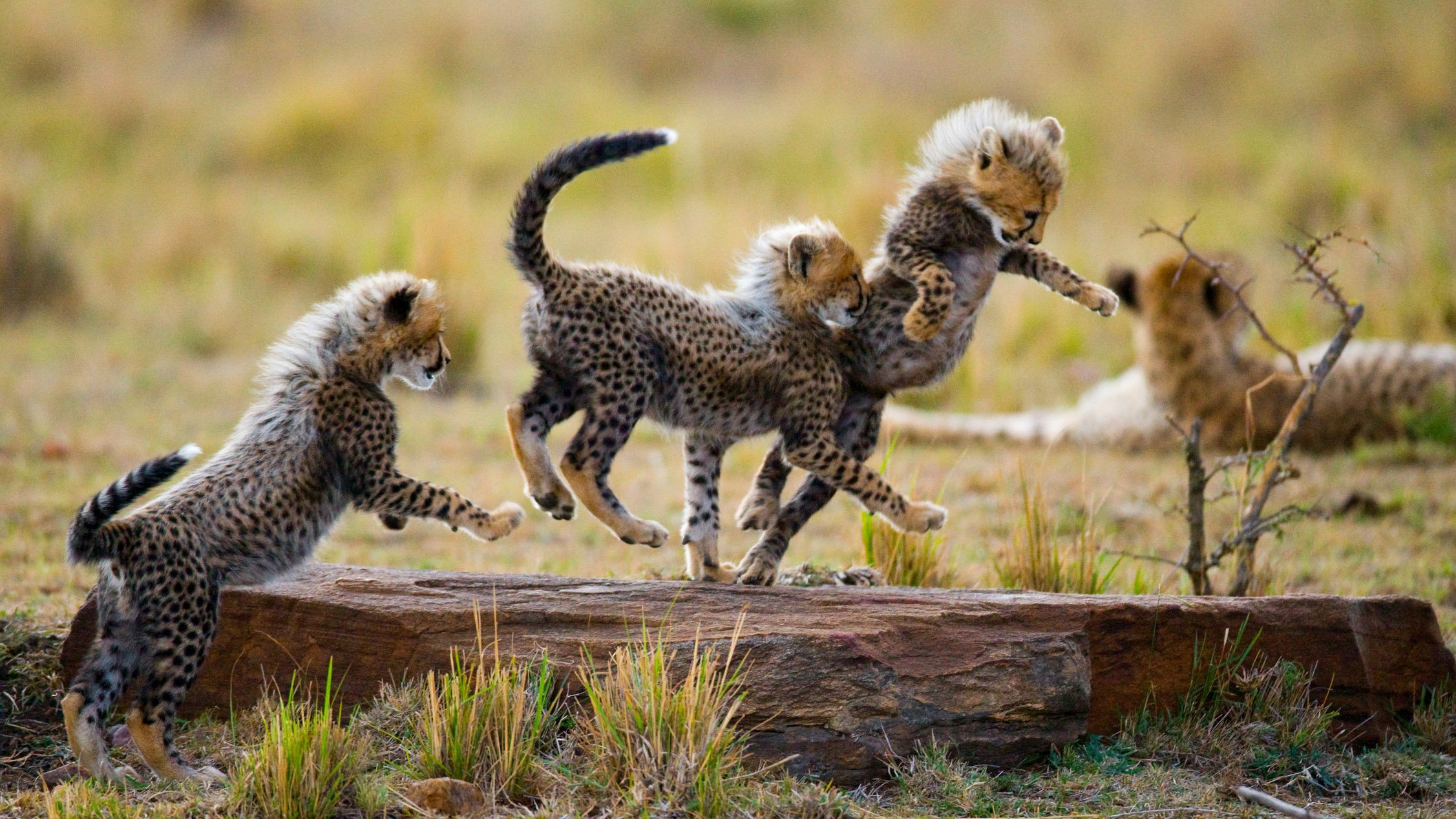 If you’ve always wanted to explore East Africa, why not take a look at our Rwanda Gorilla Trekking and Maasai Mara Safari, which combines mountain gorilla trekking on the rainforest-draped slopes of Volcanoes National Park with a safari across Kenya’a endless savannah plains? With just a short flight between sightings of mountain gorillas and lions, cheetahs, elephants, rhinos and more, it’s a 10-day adventure wildlife enthusiasts will never forget. 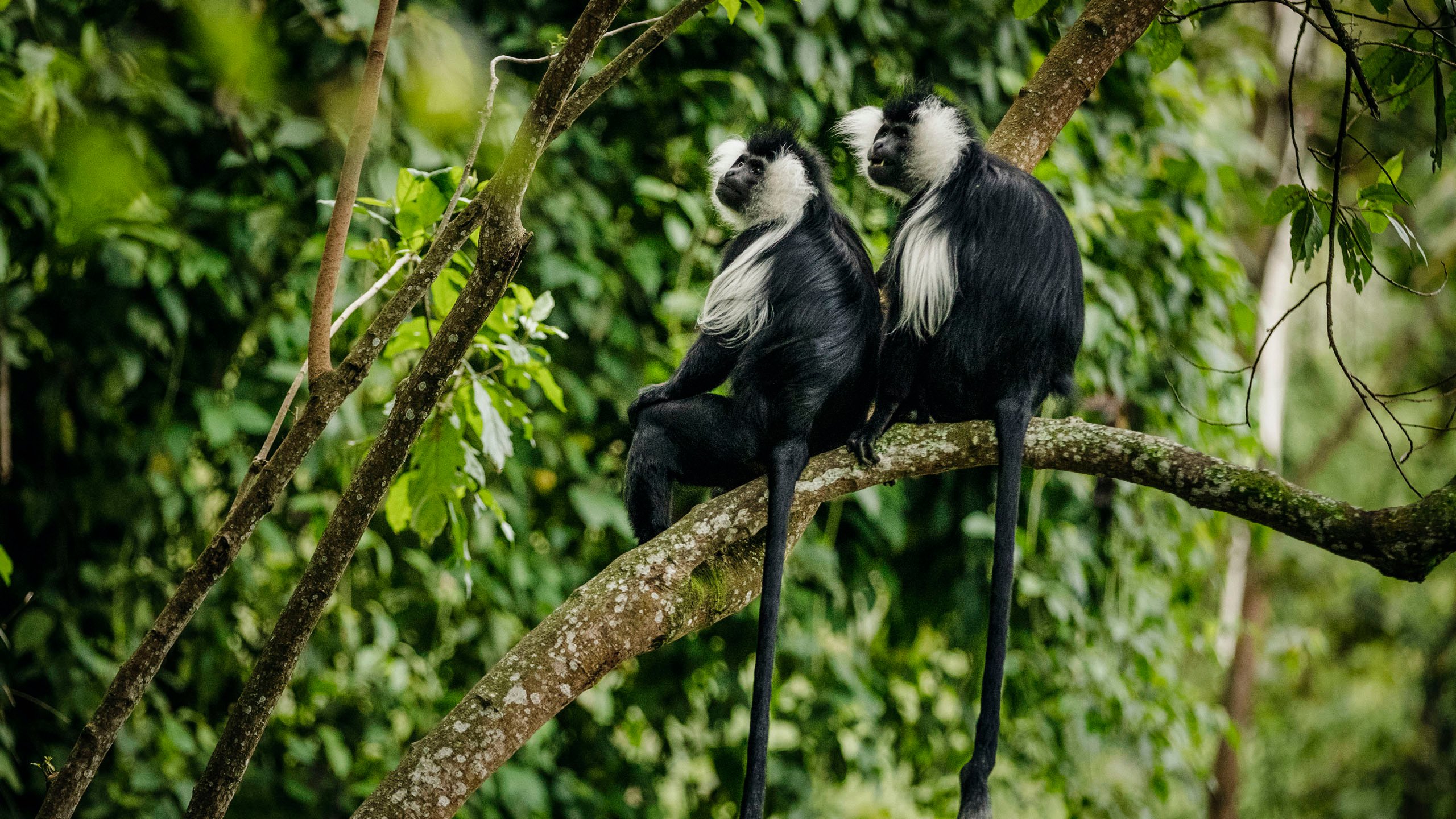 If you’re fascinated by primates, our eight-day Luxury Rwandan Primate Adventure is made for you. You’ll travel to Nyungwe National Park, where you’ll be immersed in the magical experience of East Africa’s only forest canopy walkway and get up-close with chimps, magabeys, and black-and-white Angolan colobus monkeys. Then it’s on to meet their much-larger cousins, the mountain gorillas, at Volcanoes National Park.

The Best Place to Stay for Gorilla Trekking

Here at Jacada Travel, we’ve got close relationships with some of the finest high-end properties in Rwanda, so you can be sure we’ll find the perfect accommodation to suit your tastes and needs.

From the uniquely designed, environmentally aware Bisate Lodge forest villas, nestled in the natural amphitheatre of an eroded volcanic cone with panoramic views across rural hills and Afro-alpine forests. To the naturally stylish banda cottages of Virunga Lodge, an eco-lodge sitting on a 2,300-metre hilltop with panoramas of the ‘twin lakes’ of Ruhondo and Bulera and the string of Virunga volcanoes.

Maybe you’re more taken by the homely, secluded standalone cottages of Sabyinyo Silverback Lodge, with their big fireplaces and cosy lounges offering breathtaking views from their spot in the foothills of the Virunga mountains. Or you could opt for Singata’s first Rwandan offering: the much-anticipated Kwitonda Lodge, tucked away on a 178-acre parcel of lush meadows and wetlands on the edge of Volcanoes National Park, which opened in August 2019 and brings with it their celebrated philosophy of sustainable luxury.

Why You Should Go Gorilla Trekking with Jacada Travel

When it comes to a once-in-a-lifetime experience like mountain gorilla trekking, it’s important your trip lives up to your lifelong dreams. We take time to understand your needs and interests, so we can plan a totally bespoke itinerary that surpasses your wildest imagination.

Our first-hand knowledge means we can provide helpful tips and honest advice on everything from the best place to stay, to how to prepare and what you should pack. Travelling with us means feeling confident you’re getting the best trekking experiences on offer.

We have access to some of the best mountain gorilla guides in Rwanda, who are all passionate about protecting the species while facilitating gorilla encounters in the most responsible way. A portion of your trip cost will also support mountain gorilla conservation.