Today’s Chilean cuisine is a result of the fusion of Spanish fare with Chile’s own culinary traditions that focus on the produce from each of this diverse land’s regions. Top chef Rodolfo Guzman tells us more about his homeland’s unique food scene.

Originating from the Chiloé Archipelago, Curanto is a hotpot of shellfish, meat, potatoes, dumplings and vegetables, that’s traditionally cooked beneath red-hot stones in a hole in the ground. Now Curanto is more commonly cooked in a stew-pot over fire, but the traditional method is sometimes used too.

Chupe de Locos is a distinctly Chilean dish, which consists of Abalone, baked in a creamy cheese and bread sauce with fresh herbs. Enrizos de mar are sea urchins, which in this recipe are accompanied by a parsley and lemon butter sauce.

‘I’d take them to a place called Rancho de Señora María, because you can get real Chilean food that’s cooked with amazing skills and and produce.’ ‘Go to Aquí Jaime in Concón for the sea view. This restaurant is all about the local seafood, since it’s located on top of the rocks by the sea. It’s not fancy but it is truly Chilean.’

The beachside town of Concón is located close to Viña del Mar, and Aqui Jaime is the beach town’s exceptionally popular dining spot, offering the chance to dine on fresh seafood with a view of the ocean. 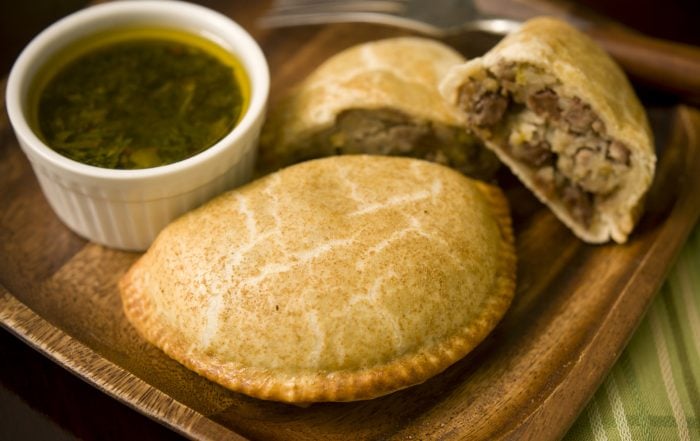 ‘Visitors to Chile should go to the markets around the country to buy from the local fishermen, and they should take a trip down south to meet the indigenous Mapuche people. By doing this you can learn so much about true Chilean cuisine.’

The majority of indigenous people in Chile are Mapuche; a community that originates from south-central Chile and Argentina, including areas of Patagonia. Mapuche cuisine was influenced by the introduction of Spanish dishes, creating the Chilean food of today.

Rodolfo Guzman is the chef behind world renowned restaurant BORAGó, which offers up inspired tasting menus that showcase Chile’s endemic seasonal ingredients – supplied by small producers and communities of foragers – from each of Chile’s diverse regions, while also incorporating traditional Chilean cooking techniques, such as cooking over rocks and smoking with Chilean wood. Prior to opening BORAGó, Rodolfo cooked under Andoni Luis Aduriz of the esteemed Spanish restaurant Mugaritz. “Mugaritz is not only about amazing food, but also the experience that goes far beyond that of any other restaurant,” Rodolfo enthuses. This culinary experience has defined the work he does now. Rodolfo has taken part in culinary events worldwide and previously hosted his own TV cooking show.

The interior of BORAGó.