The Birds of Borneo: A Journey Through Sabah

Venture to the rainforest, mountainside and islands of northern Borneo to seek out the abundant bird life that’s unique to this bio-diverse region. 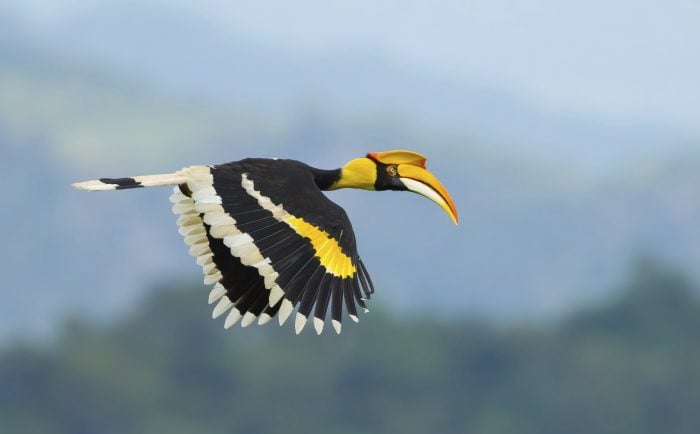 Bird enthusiasts are enticed to Malaysia’s rainforest and shores with the promise of catching a glimpse of rare species that dazzle with their brightly coloured plumage and startle with their distinctive cries. Each autumn at least 10 million birds migrate to Malaysia from Northern Asia, with more migrating from Australia to escape the winter months. This bio-diverse country boasts an astounding 720 different species of birds, and 40 of those are endemic. Sabah, the Malaysian state of northern Borneo, is one of the nation’s wildlife hotspots, encompassing mountain ranges, lowland rainforest, swamps and coastline that’s home to as many as 622 bird species. A journey through this incredible land can open up this avian world to you. 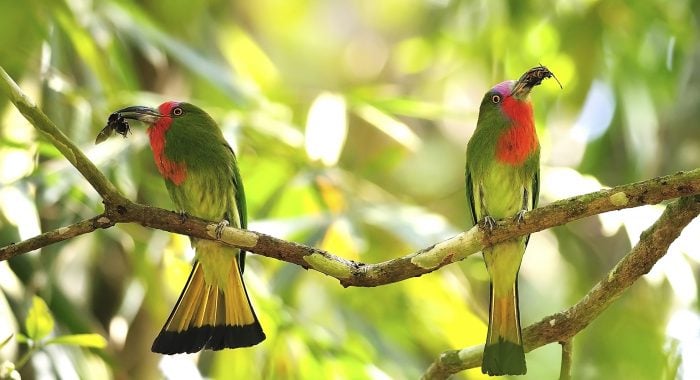 Not far from Sabah’s capital Kota Kinabalu, Mount Kinabalu, which rises to 4,095 metres, is home to many of the island’s endemic species, including the Whitehead’s Trogon and Whitehead’s Broadbill. The UNESCO World Heritage Kinabalu Park covers a huge 75,370 hectares, ranging from lowland rainforest to sub-alpine, creating the ideal environment for a variety of species, 17 of which are endemic to Borneo. Poring Hot Springs is especially rich in lowland birdlife and a stark contrast to the mountainside. The area surrounding these hot springs and the trail leading to Langanan waterfall are visited by bird species like the Banded Broadbill. 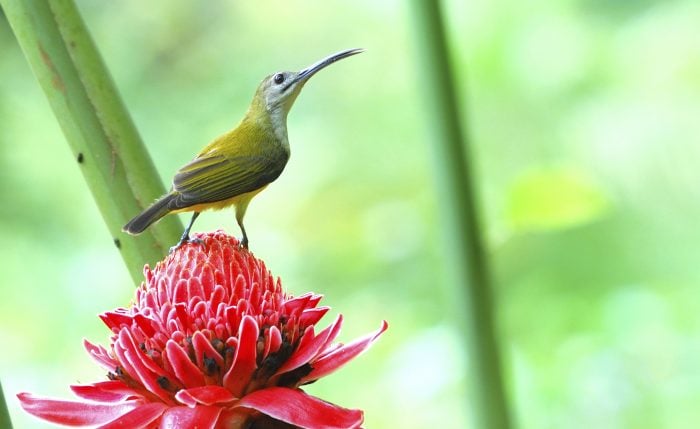 At the edge of Sepilok Forest Reserve near Sandakan, where many people come for the Orangutan Rehabilitation Centre, The Rainforest Discovery Centre is another prime spot for bird life. Situated by a lake, the lowland rainforest can be explored by stepping across the canopy walkway, climbing up the observation tower and hiking along the forest’s marked trails. This is the place to go to see the endemic Bornean Bristlehead. 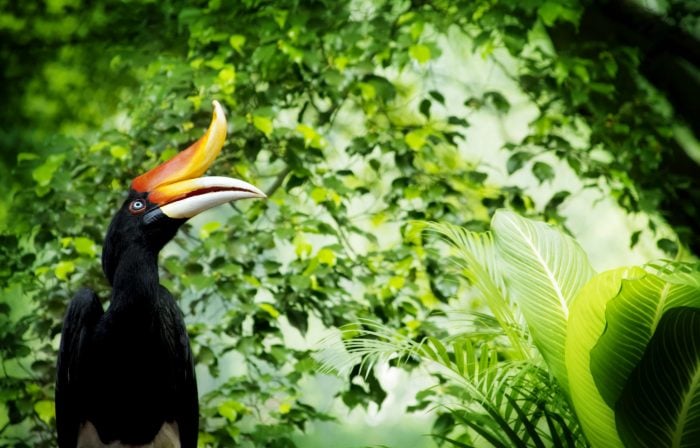 See hornbills, eagles, egrets and storks, including the impressive Rhinoceros Hornbill, along this waterway that encompasses the country’s largest freshwater swamp, flowing 560 kilometres from the mountains to the Sulu Sea. The Lower Kinabatangan is one of the richest wildlife areas in Southeast Asia, with tributaries, oxbow lakes and forest trails to explore. Gomantong Caves, a limestone outcrop, is an important nesting site for many birds along the river. 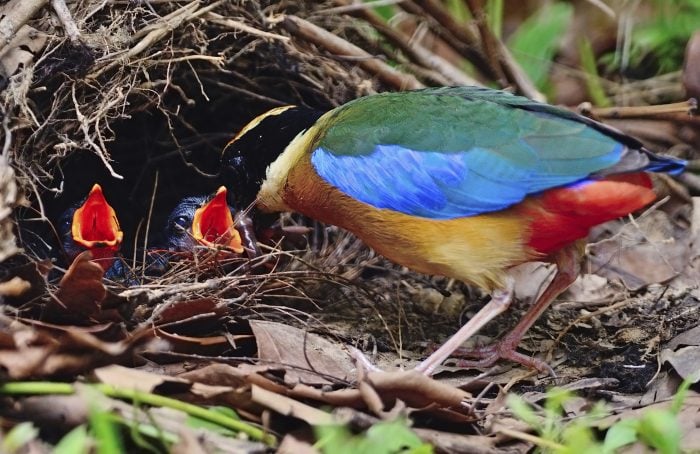 Most of Sabah’s resident birdlife can be found in its lowland rainforest, including the virgin forest of Danum Valley Conservation Area. This birdlife is best seen from 260 metres above the forest floor on the canopy walkway, or by venturing through Danum Valley’s network of forest trails. 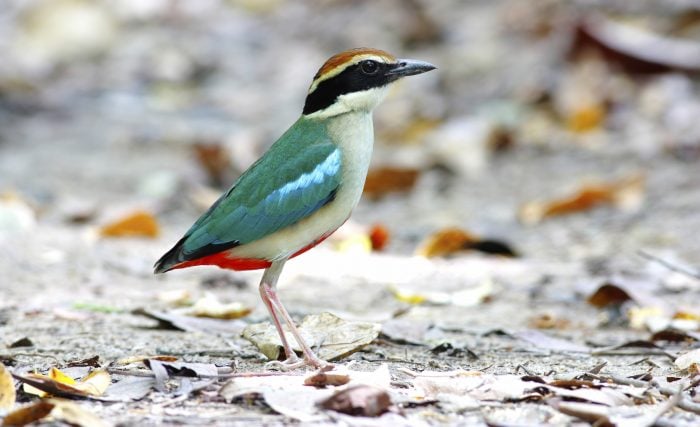 As the largest wildlife reserve in Sabah, Tabin has 260 recorded bird species. This secondary forest is less dense than other areas that are primary forest, allowing more light and visibility between the trees, which is ideal for watching and photographing birds. Alongside eight endemic species, Tabin is home to hornbills, broadbills, and at night, the Buffy Fish Owl. Tabin’s salt lake, mud volcano and old palm estates create a haven for wildlife, as they feed on the palm fruit and leaves. 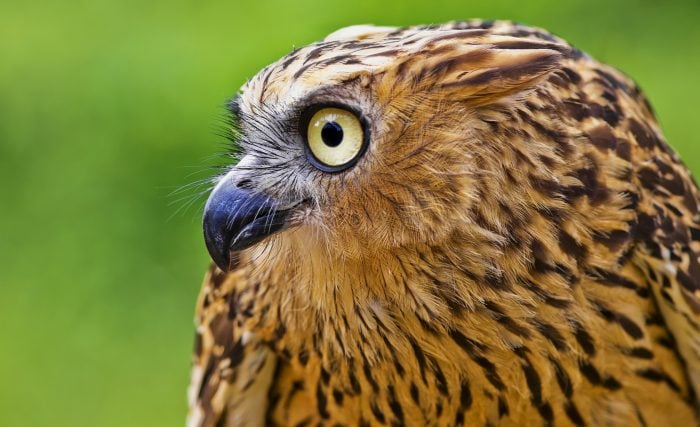 From Sabah’s 1,500 kilometres of coastline, many wildlife-rich islands can be reached for sightings of fascinating and rare bird species. Just a short distance from Kota Kinabalu, Pulau Tiga is home to hornbills and the White-bellied Sea Eagle. Slightly further afield is Pulau Mantanani, an island that’s best known among wildlife enthusiasts for sightings of the Mantanani Scops Owl, as well as the roosting of thousands of frigatebirds that migrate to the island each year. A short flight from Kota Kinabalu takes you to Pulau Layang Layang atoll, a breeding ground for seabirds like the Brown Booby, while the Semporna islands, including the well known diving-spot Sipadan, boast species, such as the Nicobar Pigeon, that can’t be seen anywhere else. 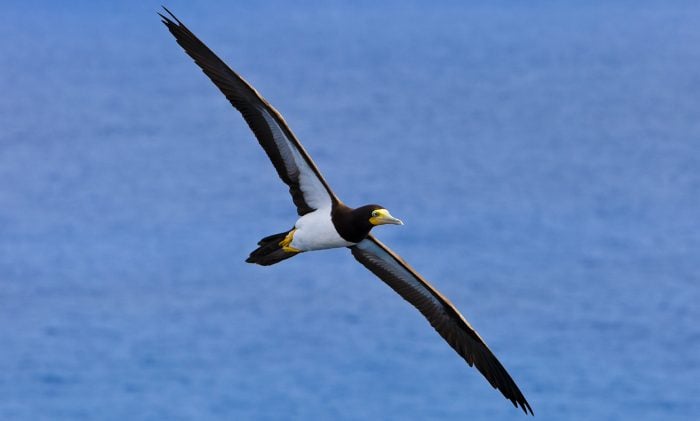 In northeast monsoon season, from November until late March and early April, many birds migrate from northern Asia. As this monsoon season comes to a close, Borneo’s birds begin to breed, with others breeding later in April, which is the driest time of the year. May to October is the time for trees to fruit, so this is when Borneo’s fruit-eating birds breed. During the monsoon season there are many heavy downpours, but Sabah can be visited all year round, with a climate that varies between the island, rainforest and mountain environments. 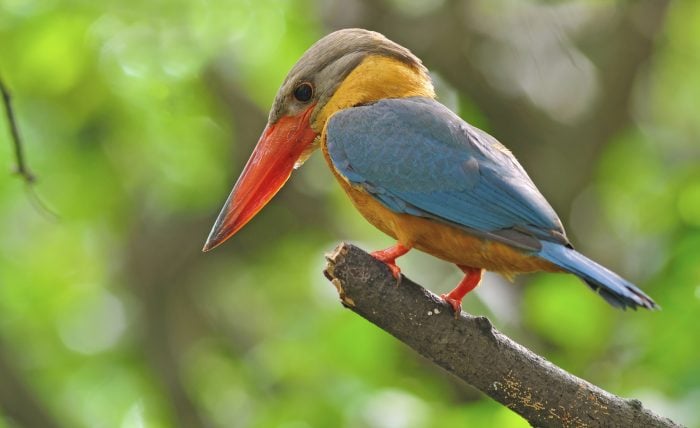