Research into the notorious great white shark has revealed an intelligent animal quite different from the fearsome killer we’ve come to imagine, but despite the misrepresentation of the white shark, witnessing its incredible breaching technique in South Africa’s False Bay serves as an awesome reminder as to the sheer might of this highly adapted predator…

The great white shark needs little introduction. Forged into a symbol of fear by Hollywood films such as Jaws, and hardly helped by its unnervingly deadly appearance, the great white shark is actually not quite the terrifying, ruthless killer than many might think – even if you’d rather not happen upon one unexpectedly.

New research has found the sharks to be quite uninterested in humans as prey; we’re too bony for sharks, who generally seem to prefer the rich blubber of seals. Research has also revealed many more interesting aspects to these incredible creatures – and one of these things is breaching, a behavioural trait that seems largely restricted to the waters around South Africa. 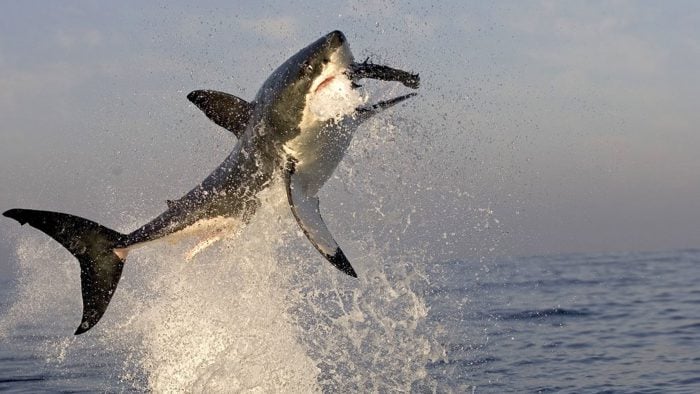 One of the most fascinating characteristics of the great white is its breaching behaviour: a surprise attack in which the sharks launch themselves at their prey from beneath, reaching speeds of over 25 miles (40 kilometres) an hour, propelling themselves clean out of the water.

False Bay’s Seal Island, 45 minutes from Cape Town, is the best place in the world to watch this awesome spectacle.

Researcher Chris Fallows is one of the world’s leading authorities on white sharks, and he was the first photographer to capture breaching on camera. In 2000, Chris – who has been tagging great whites since the late 1980s – and his wife Monique set up Apex Shark Expeditions, the first tour company to allow visitors to witness white shark breaching. Apex have been featured in many white shark documentaries, including the Discovery Channel’s Air Jaws.

Why do great white sharks breach?

Breaching is a great white shark hunting technique, designed to surprise their prey (in the instance of False Bay, the fur seals) and hit them with such force that they’re incapacitated. Apex have found that over the past eighteen years, the success rate of a breach is around 47% – a figure that has declined slightly over the past five years, from 51%. If the seal manages to avoid the clutches of the shark’s jaws, then the chase is on!

Around Seal Island, breaching seems to be far more prevalent than anywhere else in the world. The sharks are attracted in the first place by the 64,000 Cape fur seals that live on Seal Island.

Experts suggest that one reason sharks breach in False Bay is because of the size of the fur seals, which are not big enough to hurt the sharks when they make contact, but are sizeable enough to grab mid-launch. Another factor is thought to be because there is a steep drop-off just off the island, and the water in which the seals suddenly find themselves is deep enough for sharks to approach undetected.

Most of the sharks that breach around Seal Island are ‘teen’ sharks (around three to four metres long), still agile enough to leap, and without the bulk of adult sharks. 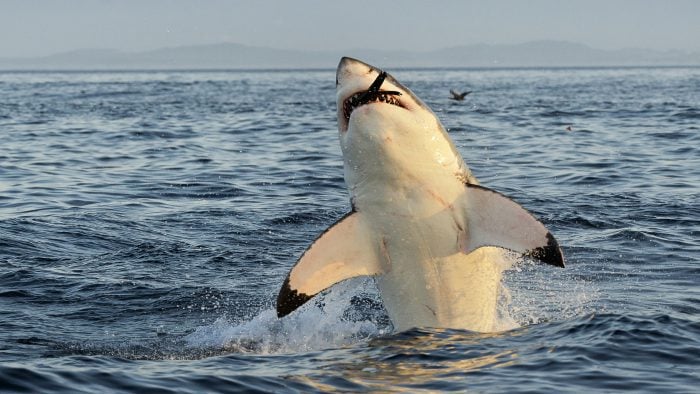 Tours allow companies like Apex to fund important research. Chris and Monique’s tour groups are the smallest in False Bay, and visitors will benefit from the couples’ expert knowledge and obvious dedication to protecting the sharks.

Some companies are guilty of excessive chumming of the water to attract sharks, but Apex don’t use lots of bait to attract sharks to the area, instead relying on their daily observations over the past years.

When is the best time to watch the sharks breaching?

The shark breaching season at False Bay (when the white sharks visit these waters) is from May to September, with June, July and August being the best months for activity. There is a chance of seeing some breaching activity outside these months, but it’s not as common.

Early morning is the best time of day to catch the sharks hunting, without having to rely on a decoy to encourage an attack.

Watching the white sharks breach is a great way to see these finely tuned animals in their natural environment, providing a more ‘authentic’ experience than cage diving. Apex offer long trips out to False Bay where you can watch natural predation and cage dive, too: an essential part of any adventure or wildlife enthusiast’s Cape Town itinerary.