Natural Wonders of Iguassu and The Pantanal

Ten-day example trip
Similar Trips From
PP
A jaguar hunting in Brazil's wild Pantanal region
The skyline of Sao Paulo, Brazil's largest city and one of the most diverse in South America
The sun sets across the waters of Brazil's Pantanal, filled with giant water lilies
A helicopter flight above Iguassu provides a fresh angle for absorbing the falls
An alligator peeps out of the water in the Pantanal
An aerial view of the Pantanal region, home to the world's largest tropical wetland

From a vibrant city to stunning falls and incredible wildlife

Personalised journeys from start to finish

Every detail taken care of

Use this itinerary to inspire your bespoke journey

The most rewarding of Latin American adventures, this ten-day itinerary delivers a flavour of Brazil’s wild side. You’ll go from the hustle and bustle of a modern metropolis to the grandest of natural phenomenon and most breathtaking of wildlife.

Brazil’s natural world is incredibly varied and in no way understated, in fact, on this trip alone you’ll encounter the the largest waterfall system in the world and the world’s largest tropical wetland. Its cities are just as captivating, and in Sao Paulo, you have a city which is the most populous in Brazil, the western hemisphere and the southern hemisphere, and one of the most diverse.

Your Brazilian adventure begins in this nation-sized city recognised as the heart of modern Brazil. The city’s history of immigration has helped to create a cosmopolitan and multicultural identity throughout Sao Paulo, something you’ll discover in everything from its food to its music, ensuring it’s one of the world’s most evocative cities.

Your next stop sees you visit the natural wonder of the Iguassu Falls, enhanced by private tours that see you explore the falls from both the Brazilian and Argentinian side, as well as enjoy a boat trip on the water and a helicopter flight over the falls. More blissful nature awaits in Brazil’s Pantanal region, home to an incredible array of flora and fauna, including the elusive and majestic Pantanal jaguar which you will track during your stay.

Private Transfer to your hotel in Sao Paulo

The Fasano Sao Paulo is simply a world class hotel, with an understated style, complete luxury and impeccable service throughout. Located in Jardims, just off of the famous shopping street of Oscar Freire, there’s much to do in the immediate vicinity (an important consideration in a city of this scale). The Fasano’s facilities are all top class, with a spa, a bar and two restaurants which are among the very best in the Sao Paulo (the Fasano family, built their reputation on their restaurants before moving into hotels). All the rooms in the Fasano have been decorated with a real eye for quality; every item, fixture and fitting has been carefully sourced and the rooms are extremely comfortable and spacious. All in all, the Fasano Sao Paulo is a class act throughout.

One of the top luxury hotels in Brazil, the Emiliano is a pleasure from start to finish. Set on Rua Oscar Freire (the most exclusive street in Sao Paulo) the location is perfect. The service here is outstanding and is consistently rated amongst the best in Brazil. This boutique hotel has just 56 suites each with contemporary Brazilian furnishings mixed with iconic Eames pieces, Hungarian goose-down pillows and fine Egyptian-cotton linens. For a culinary treat, the Champagne & Caviar Bar offers a selection of rare caviar and European roes.

Located in the heart of the city close to the iconic Avenida Paulista (the city’s main artery), L’Hotel is a French style luxury hotel with excellent service and seventy-five comfortable well-appointed rooms. Facilities include two restaurants, a small pool area and spa. 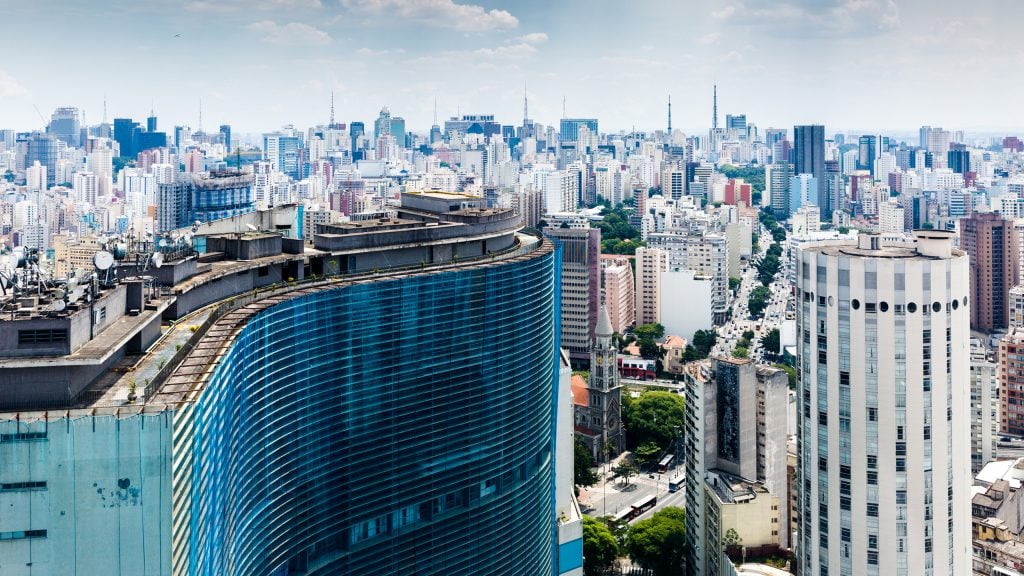 Your days are free to explore and enjoy the cosmopolitan city of Sao Paulo. You'll have our recommendations of excellent restaurants and bars to make sure you make the most of your stay.

Take a private city tour of Sao Paulo's highlights, the self-appointed heart of modern Brazilian culture. This is a huge city and your tour will depend on your interests, but possible stops include the Liberdade neighbourhood, home to one of the largest Japanese populations outside Japan. You might also stop by the Sé Square, the city's central square, Ibirapuera Park - the biggest green space in central São Paulo - and Patio do Colegio, the site where the city was founded in 1554.

Flight from Sao Paulo to Iguassu

Private transfer from Iguassu airport to your hotel

Actually inside the national park on the Brazilian side, this luxury property is ideally located. Walking out from the lobby one can hear the thunder of the falls and the hotel is surrounded by lush tropical rainforest. The hotel has been recently refurbished throughout to a high standard and in keeping with the colonial mansion style of the hotel’s original design. The hotel has large rooms with high ceilings, hard wood flooring and period style furniture. There is a large pool area in the rear to relax at with a drink after a day exploring the falls. 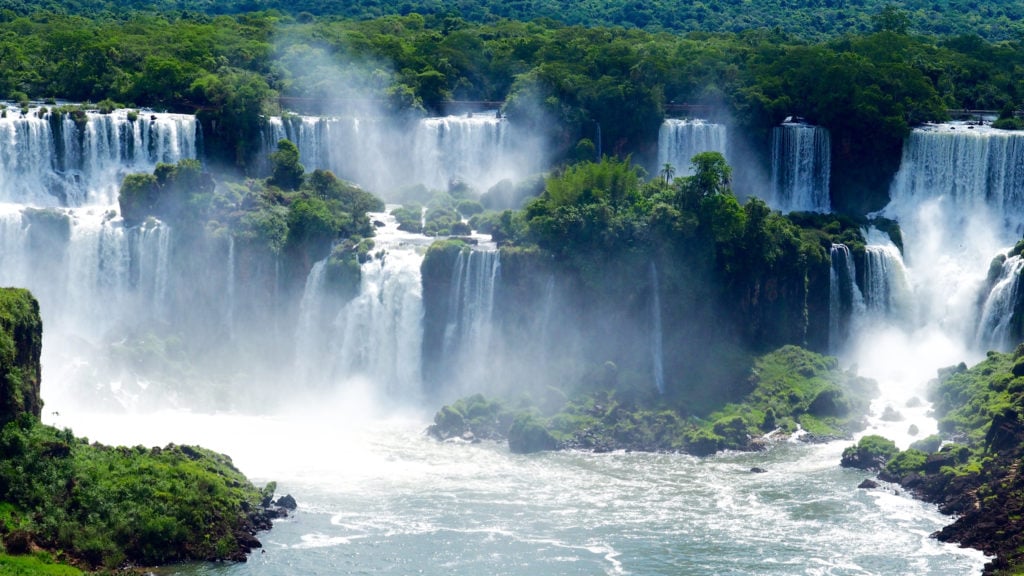 Iguassu Falls is a must-see wonder of the world, spanning 2.5km with a whopping 250 different cascades, surrounded by the beautiful Iguassu rainforrest and several walking trails. Found on the border of the Argentine province of Misiones and the Brazilian state of Paraná, together they are the largest waterfall system on earth. Here you will feel totally enveloped in Brazil's natural world, hundreds of miles away from any bustling city.

Private tour to Iguassu Falls Argentinean side, including boat trip

A stunning tour of Iguassu, where you'll get a chance to really get up close to the falls. Your guide will pick you up from your hotel and bring you by private vehicle to the entrance of the park on the Argentinian side. You'll then be taking the rest of the tour mainly on foot. Exploring the various wooden walkways that lead through the national park close up to the many chutes of the falls.

One of the most spectacular sites of the falls is the Devil's Throat, which sees the largest flow of water. In order to visit the Devil’s Throat, you must board the train at the Main Station or at the Cataratas Station, close to the Upper Circuit. For those who love trekking, there's the one-kilometre-long Sendero Verde (Green Trail) that connects the Visitors Centre to the Cataratas Station and to the Upper Circuit.

Once you're at the Devil’s Throat Station, you'll have to walk for 1.100 metres on a flat catwalk built over the Upper Iguassu River. This catwalk crosses several islands. Once you get to the end of the catwalks, you'll be surprised by a strategic lookout point resting on the side of the gorgeous Devil’s Throat.

Take a stunning flight over the breathtaking falls for a unique perspective and unforgettable views.

Private transfer from your hotel to Iguassu airport

Flight from Iguassu to Sao Paulo

Transfer to your lodgings in the Pantanal

Accommodation in The Pantanal

Caiman Ecological Refuge is the most comfortable lodge in the Pantanal and offers a truly wonderful and unique experience. The lodge is set in the grounds of a working cattle ranch and despite the strong human influence in this area, there is still plenty of wildlife to see. Capybaras, hyacinth macaws, caiman, jaribu stalks and lots of other wildlife are all seen regularly in the immediate surrounds of the lodge. Activities are shared with other guests (a maximum of 12) and are tailored to the less active traveller, with hikes generally of a shorter length and cycling on relaxed trails

Explore the Pantanal from Caiman Ecological Refuge on a program that includes two activities per day, one in the morning and one in the afternoon, and one nocturnal excursion. These may include walking tour in surrounding area on trails through the forest to observe flora and fauna, or through the ranch and research centres, ending at Paizinho’s bridge, an excellent place to observe the Spectacled Caimans. They'll also be photographic safaris on specially adapted vehicles where you'll try to find a wider variety of animals, canoe trips out onto the waters and night time wildlife watching.

Spend a full day and evening with the Jaguar Habituation Team. You'll head out in the morning and get involved in their daily activities, searching for the ever elusive jaguar. The team spends a huge amount of time searching for the animals themselves as well as for clues that point in the right direction when the nocturnal jaguars get active as the sun sets.

Together with the team, you will check camera traps for any sign of them, look for tracks on the ground, try to locate kills that jaguars might have made during the previous night, check data from satellites that follow the collared animals, and even search for them via a receiver that can capture VHF signals emitted by their collars. You may have a chance to experience tracking on foot with the trained trackers, to see ﬁrsthand pictures taken by the camera traps.

Once a sign of the animal is found, you will attempt to locate it in order to further the habituation process. More often than not you will be likely to ﬁnd the approximate location of the cats during the day, increasing your chances of ﬁnding them at night. Depending on circumstances, you will set out at sunset or just after dinner in order to see the jaguars. You will also be given a full presentation on the project’s work and objectives at the base station.

Use the navigation to jump down to a particular part of this example trip
Days 1-3: Sao Paulo
Days 3-6: Iguassu Falls
Days 6-10: The Pantanal
Prices start from
PP
Call us
646-661-3140
or
Plan your adventure
What's your dream trip?

We design private journeys for people who wish to go beyond the typical and experiencing something truly special. Our amazing team of travel designers, concierges and local guides work together to create unique journeys that get deep under the skin of where you’re visiting.

Natural Wonders of Iguassu and The Pantanal

Ten-day example trip
Prices start from
PP
1
Simply complete the form below or give us a call
2
We'll get in touch within 24 hours and work with you to perfect the details of your trip.
3
Sit back and relax while we plan the perfect itinerary for you.

We create fully personalised trips from start to finish, working with you to pick locations, accommodation and guides that suit you.

From in-depth private tours to restaurant reservations, we take care of every detail so you can make the most of your journey.

www.jacadatravel.com
Call us. 646-661-3140
Natural Wonders of Iguassu and The Pantanal
7340
Per Person
From a vibrant city to stunning falls and incredible wildlife
Introduction
Example itinerary
Please note that this is an example itinerary. Your trip will be personailised just for you, by one of our expert travel designers.
Call Enquire
My inspiration My
inspiration Contact a travel designer Start
planning