When is the Best Time to Visit the Galapagos Islands?

Wildlife activity in the Galapagos Islands varies throughout the year, so there's always something to see depending on which islands you’re near.

If you're looking to visit during peak season, then aim to travel between December and the end of April, as well as the popular summer months of July and August. There’s a brief rainy season from January to March, but it's also the warmest time of year, so it shouldn’t deter you from visiting. In fact, the wetter months (usually between December and June), don't see all that much rain, but what they do result in is leaving the scenery beautifully green before the dry season begins.

For snorkelling, June to December is usually the best time to visit the Galapagos Islands. However, it can still be a rewarding experience outside of that period. Sea lions and frigate birds can be spotted throughout the year. Mating and nesting season for many other species of animals usually starts around February and lasts until April.

From June to August the Humboldt current which runs along the South American coast causes a mist over the sky and the highlands of the islands and temperatures can be slightly cooler. This current also brings with it plankton and other nutrients, which as a result, attract more fish and birds the area. While this is great news for snorkelling, be warned, the water can get very cold! You'll generally find the seas are a little choppier during these months and the wind can pick up.

When is the best time to see wildlife in the Galapagos?

The warmer weather after the winter signals the beginning of mating season. Scores of animals usually begin their nesting season in February, lasting through April.

Because sunlight is good all year round however, most species on the Galapagos are “tropical breeders,” meaning they don’t particularly rely on seasons. It’s different every year for most species, and very few species are seasonal. A few notable species that are seasonal include:

Restricted to Espanola, they usually leave between December/early January and return in April (otherwise there’s no wind and they can’t get off the ground). The waved albatross is the largest of the Galapagos birds, with a wingspan that can extend up to two and a half metres. Between January and March, they relocate to the Ecuadorian and Peruvian coastlines.

Nazca boobies have colonies in Espanola and Gereveza. The largest of three species of boobies, their name comes from the Spanish word for clown, ‘bobo’, alluding to their clumsiness on land. Look out for them foraging in the waters around the islands. They catch fish by plunging into the waters from up to 30 metres high. They lay their eggs between November and February which is subsequently the best time to see them up close. However, they are around all year.

Turtles and marine iguanas are seasonal because they depend on the warm season to incubate eggs in the sand. In January the green sea turtles make their way up onto the sand to lay their eggs. By April these eggs will begin to hatch, so look out for tiny turtles dotting the sands trying to head to the water. The marine iguanas begin to reproduce in February.

Some marine life species come in for reproduction every year. They migrate from south seas to give birth and stay until their calves are large enough to swim back to the south. The peak sealion mating season begins in September and tensions run high between male sealions during this highly competitive period. Fur seals start mating the following month in October. If you want the chance to see sealion pups frolicking in the waters, then November is the best time. The dry, cooler season runs from June to December. During these months, the water is much cooler because of the Humboldt current but also more nutrient rich so the snorkelling is great at this time of year. Plankton brought over by the currents also serves as food for seabirds.

September and October tend to be windiest so the seas are a little more choppy, making them less ideal for snorkelling than some of the earlier months. In April, you have the greatest chance of seeing the mass arrival and courtship of the waved albatross on Espanola. You can also see the mating dance of the blue-footed boobie on Espanola and North Seymour Islands. To catch a glimpse of the Galapagos Albatross, head to Espanola Island between late April and early December, when they flock the island to nest. The Galapagos sea lion pups can be seen during most of the year. Breeding season takes place in October and November, but on South Plaza, it extends from July to April. During breeding season, dominant males can often be seen along the shore defending their territories, and they are notorious for getting aggressive if they feel threatened. 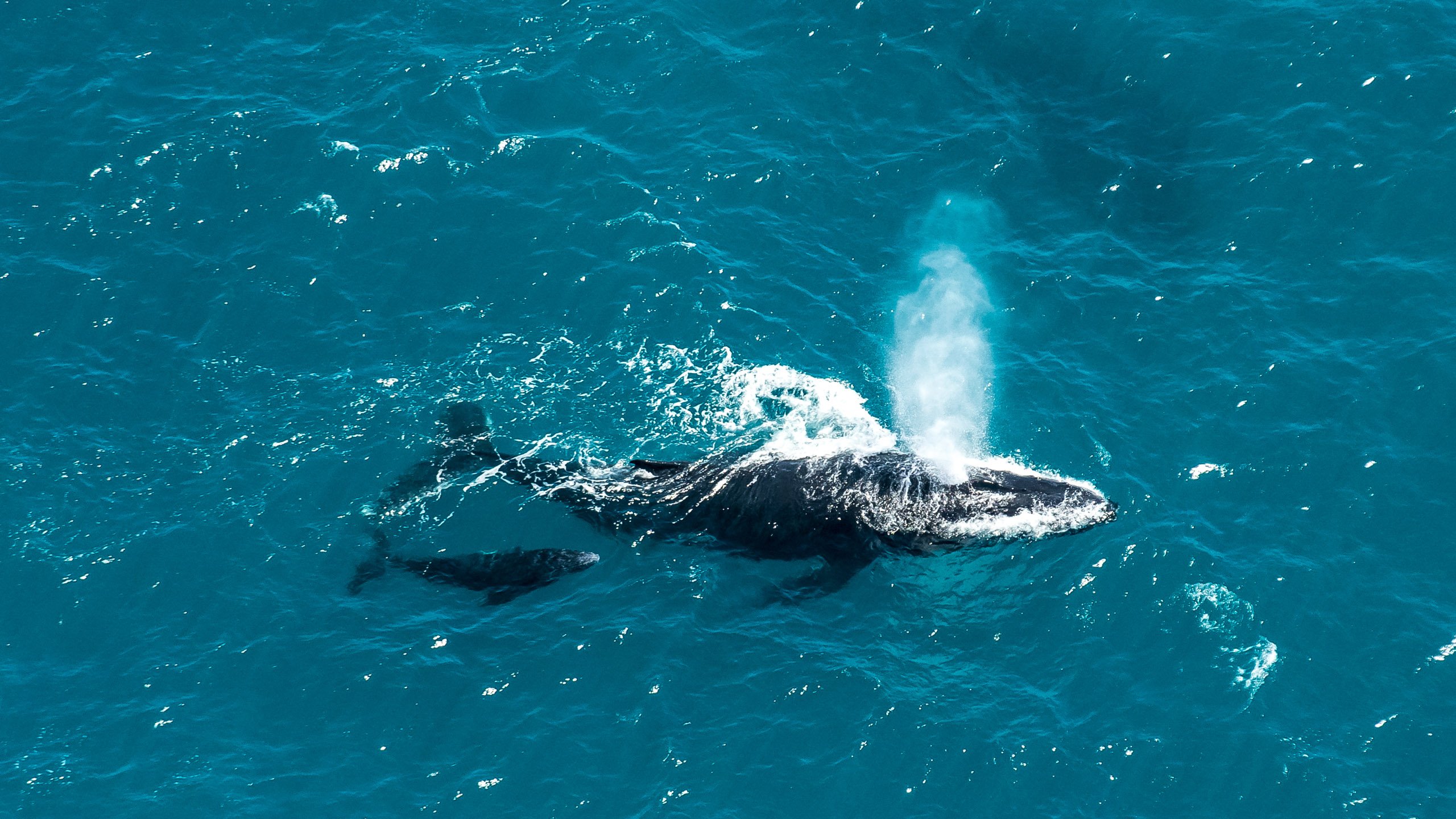 Humpback whales normally pass through the Galapagos from June to September on their migration route. Because it’s the mothers that come and give birth, it’s mainly females and their calves that can be seen during these months and there’s lots of surface activity.

Orcas, pilot whales, blue whales and sperm whales tend to spend all year in the area. They usually go to feed, so you may not always see too much of them, as they stay underwater a lot of the time. The Galapagos islands are a destination to tick off every diver's bucket list, and depending on what you want to see there are great options available all year round. Peak season for diving runs from July to December, when increased nutrients in the water attract migratory Whale Sharks. From January to May the weather is at its calmest, and you're likely to see Hammerhead sharks and Manta Rays populating the gentler waters. December usually marks the start of hatching season for giant tortoises, and they continue hatching throughout April. Green sea turtles come to the beaches to lay their eggs around January with the eggs beginning to hatch in April.

"Galapagos with a 6 year old son."

“Absolutely incredible! Makes me kick myself for not using Jacada or a travel agent before. Every detail was taken care of, making it incredibly relaxing for my son and me. Jen was very attentive and the special little personal gifts made the trip extra special. International travel can be stressful, especially with children, but private pick-up at the airport and guides handling all the little details is worth gold. This really is a first-rate personal travel service. Thank you Jacada!”

Whatever you want from your trip to the Galapagos Islands, our team of expert travel designers are ready to help.