Rachel Rueckert recalls her experiences of Thailand’s magical lantern festivals and explains the background to these beautiful celebrations.

Most people are familiar with the breathtaking photographs of Thai lantern festivals that occur each autumn: a dark sky illuminated by trails of thousands of burning lanterns. It is a special time to visit Thailand, to experience the buzzing crowds, countless decorations, flower-adorned floats, lively parades, competitions, speeches and traditional music. 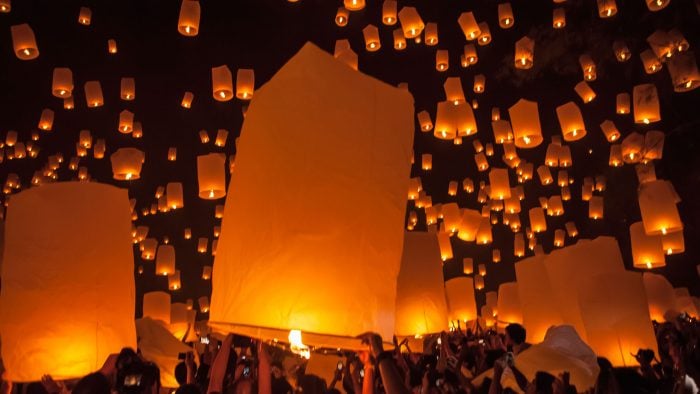 While most people recognise the iconic images of these dazzling festivals, few people understand the significance of what the celebrations mean.

In Northern Thailand, where the majority of the lantern festivals take place, there are two main celebrations, Yi Peng and Loi Krathong, which usually overlap. The main difference between these two festivals is the type of lanterns used; Yi Peng features the floating sky lanterns and at Loi Krathong, water lanterns are offered to the river gods.

Yi Peng is the event most people recognise for its floating sky lanterns known as khom loi.  Surprisingly, Yi Peng is not an official holiday, although it is a large public event. It is celebrated on the full moon in the second month of the Lanna (the ancient northern Thai kingdom) lunar calendar; yi means ‘two’ while peng translates to ‘full moon day’. 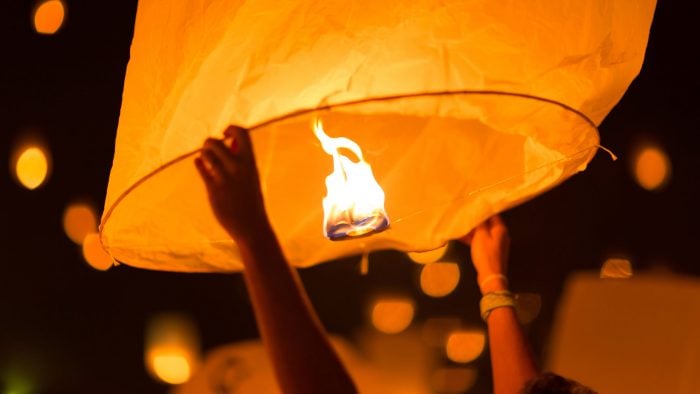 People come from all over the world to select a khom loi lantern to release into the sky. A khom loi is made of thin tissue paper with a crossed base, which supports a wax heat source. You have to break up the wax before lighting it to sustain the flame. Often people write a wish on the outside of the lantern, and it is considered good luck to watch your lantern until it disappears from sight.

There are several days during the Yi Peng festival when these kinds of lanterns are launched into the night sky. In Chiang Mai, one mass lantern launch is organised by a group of monks shortly before the festival and can be accessed at no cost. A different lantern event for tourists can be booked at a price (around $100) after the festival. However, these mass lantern launches are not part of the official celebrations and for three days during the festival, people release lanterns from all kinds of locations.

Loi Krathong, a water lantern festival, occurs on the evening of the full moon during the twelfth month of the Thai lunar calendar. It is less known to outsiders, but it is a huge celebration in Thailand. As a local Thai woman said, “It is a way to say sorry for what you do to the river during the rest of the year.” 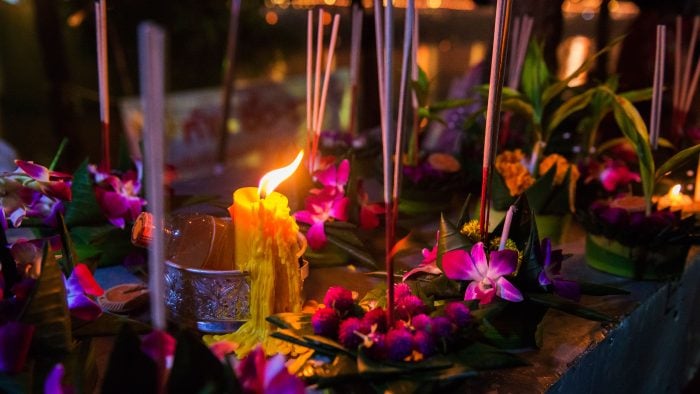 Water lanterns, also known as krathongs, are created with a base made of either the trunk of a banana tree or baked bread (which locals claim is better as it provides food for the fish). The bases are then covered with green leaves and adorned with flowers and garlands. A candle and incense stick are placed in the middle and lit before the lantern is launched into the water.

Many of the locals will be excited to help tourists make their own krathongs, but you can also purchase elaborate, premade lanterns. These are readily available from stalls set up around Chiang Mai.

The banks of the river are lined with people, crouched down saying prayers and making wishes before pushing their lanterns out into the water; many Thais say releasing the lantern is a way to send their problems away. 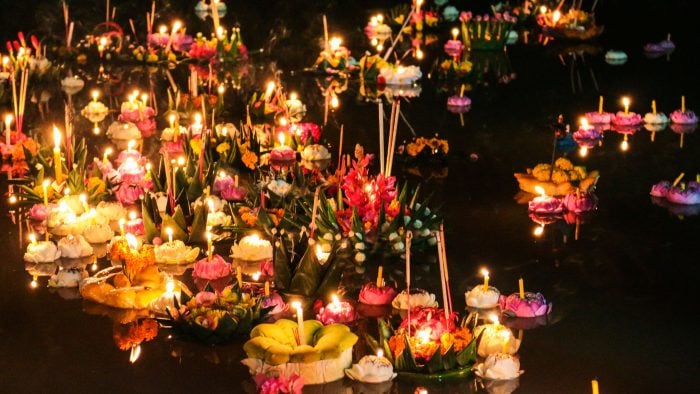 It is the chance of a lifetime to participate in both the mystical Loi Krathong and Yi Peng events. Few things are more bucket list worthy.

This year the celebrations take place from 22nd November to 25th November 2015.

Find out more about where to go in Thailand.