Overlooking central Java’s dramatic landscape of mist-filled valleys, lush forests, and towering volcanic peaks, the incredible temple of Borobudur perches on a hilltop, a pyramid structure adorned with 72 bell-like stupas that each house a statue of the Buddha. Dating back to the 8th and 9th centuries, this ancient temple is one of the most awe-inspiring sights in Indonesia.

Borobudur was built between the 8th and 9th centuries (300 years prior to Cambodia’s Angkor Wat), abandoned between the 10th and 15th centuries, and rediscovered in the 19th century. It is the largest surviving Buddhist temple in the world, and it is still a pilgrimage site for Buddhists.

Set atop a hill, the temple is pyramid-like in its structure. Surrounding a central stupa at the top of the temple, the top tiers are lined with 72 large stupas, each of which houses a statue of the Buddha. Around the bottom tiers, there are more Buddha statues and ornate panels covering the walls; in total, there are over 500 statues of the Buddha in the Borobudur temple. It is a truly fantastic sight.

The setting of the ancient temple just adds to the allure. The steaming jungle and the shadowy peaks of central Java’s enormous volcanoes, including the active Mt Merapi, make for an incredible combination of culture, history and nature. 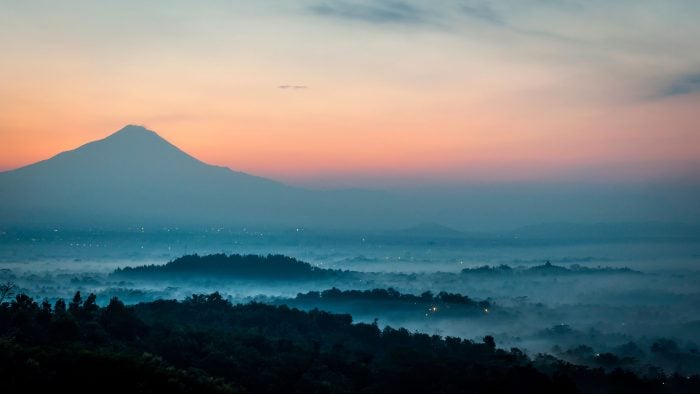 Sunrise is undoubtedly the best time of day to visit Borobudur. Access is via the Manohara Hotel Borobudur, which resides at the foot of the temple, and will cost foreigners who are not staying at the hotel about US$40.

Arrive as early as you can (visitors usually head up to the temple from the hotel between 4am and 4.30am) to get a good perch from which to watch the sun rise. When I visited (May 2014), there were about forty or so other visitors on the temple site for sunrise.

When you climb the stairs to the top of the temple, it will be dark (you’re supplied with a flashlight). As you enter the top tiers where the stupas are, find a seat on a ledge facing the stairs and you’ll be looking towards the sun as it emerges from behind Mt Merapi and the layers of low-hanging mist.

The colours are absolutely incredible; you certainly won’t have any need for Instagram filters here. As the sun begins to rise, the mist in the valley turns into a violet haze, with the sky taking on a peach-pink tinge above the charcoal-grey volcano peaks. 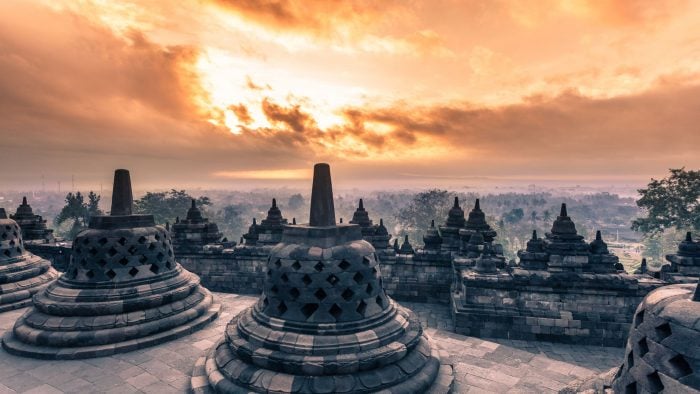 I’m no photography expert, so at this stage I will hand you over to someone who is exactly that. Richard Simko recently visited Borobudur and here are his tips for getting some good shots at sunrise:

·         Turn off the air-conditioning in your room before you leave to give your camera time to ‘acclimatise’ so it doesn’t fog up when you go outside into the humidity. Take a lens cleaning kit too.

·         Keep your ISO at the lowest setting and bring a tripod to reduce blur. Use self-timer to avoid camera shake when taking the photo.

·         Bracketing your shots (taking lots of photos of the same scene using different exposure settings) means you can blend the images together to take the best details from each image. It also means if someone steps into your shot (prepare for other people to be around, in your shot, using flashes, and so on), you can edit them out later. 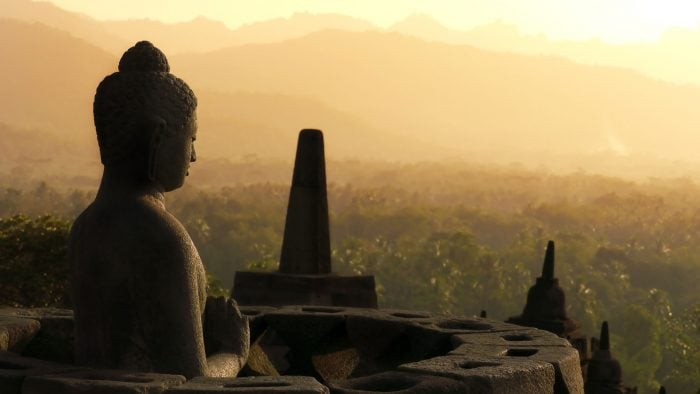 NB. One recommendation I would make after my trip to Borobudur is to make sure you take a moment to put the camera down. You’ll probably start shooting like mad as soon as the sun starts to rise and the scenery gradually reveals itself, but don’t miss out on a really incredible moment by being caught up in your camera settings. 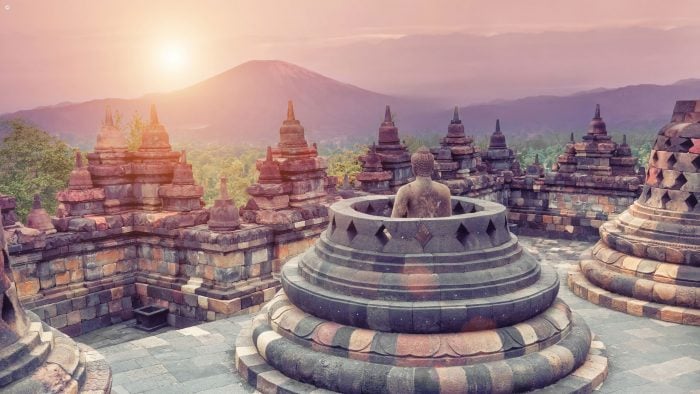 At 6am the temple site opens to the general public. When I visited (at the end of May), it was a school holiday, which meant that by 7am the temple was flooded with school children, many of whom were keen to capture me – rather than the sacred site on which they stood – on their iPhones. This is your cue to leave.

Between 5.30am and 6am, however, is a great time to be at Borobudur. Many people leave shortly after the sun has risen, keen to get back to their hotels for a much-needed coffee and breakfast. In the lull between the sunrise tourists leaving and the public arriving, there is a really pleasant quiet period, which is perfect for getting photos of the temple without anyone in the background.

If you don’t fancy the early start or you have a few days in this area, you can always head to Borobudur for sunset, which is less spectacular than sunrise, but the light is interesting with the sun lower in the sky, and it’s convenient for those wanting to include a temple tour during the day. 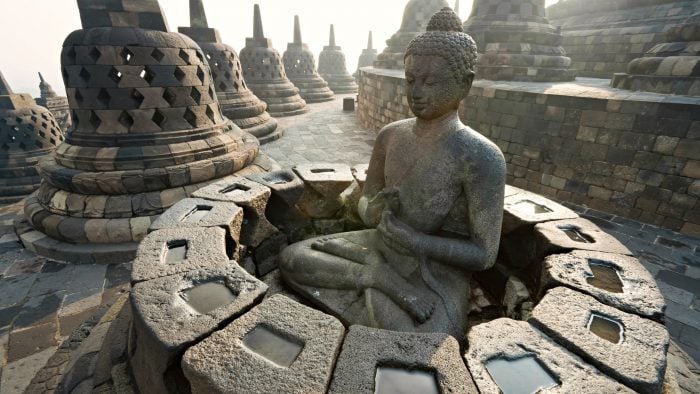 Although you can do sunrise tours from Yogyakarta, it’s far better to base yourself around Borobudur, partly to avoid an obscenely early start from the city, and partly so you can make the most of the sublime landscape during your stay.

Amanjiwo: For high-end luxury, the Amanjiwo, which overlooks the temple, will be hard to beat for both style and impeccable service. 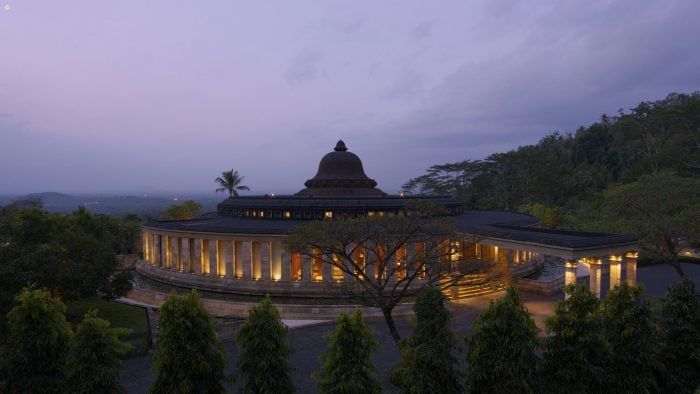 Plataran Borobudur: This peaceful hotel has views across to Borobudur and is just a five to ten-minute drive from the temple: ideal for the early-morning start. 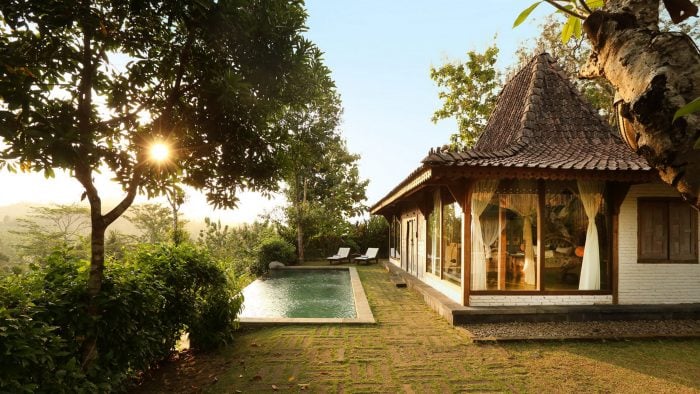 The dry season in central Java falls between May and October, with July and August being the driest months. January to March is the wettest period, but the tropical downpours are quick and sudden, with the weather in between being sunny and dry, so it’s not impossible to travel during these months; it will also be quieter. 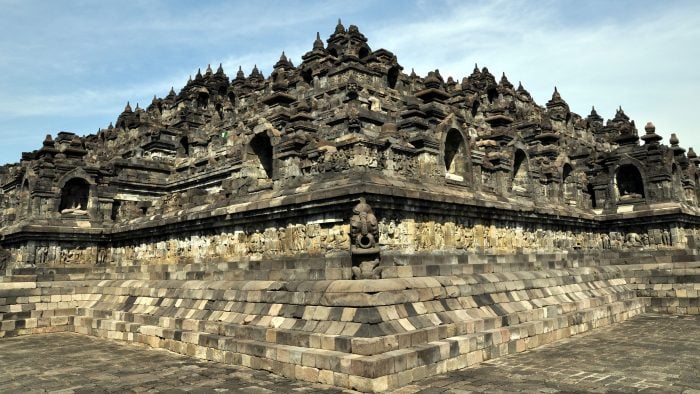 Get in touch by phone or email to find out about Jacada’s bespoke luxury tours to central Java and the rest of Indonesia.