Renowned wildlife photographer, presenter and guide Paul Goldstein on cliff-climbing polar bears, charging rhinos and how we can all get better wildlife shots.

Is there one wildlife photo you’ve taken that stands out for you? What’s the story behind it?

If I had to pick one, it would be a photograph I took of a leopard lying high up on a branch with a storm behind it, bisected by a vibrant rainbow. It was in the Maasai Mara, just outside Kicheche Mara Camp. Normally, the best photos are arrived at not by coincidence. However, I’d been out all day and gotten nothing, and there was a big storm so I wanted to get back to camp. When I was about 200 metres away, one of the staff radioed me to say there was a leopard there. No leopard should be outside in the rain but a lioness had scared it up high. The sun poked its way through the storm and suddenly there was a rainbow.

I don’t think I would have gotten that shot if I hadn’t already spent hours out in the field; I’m a big believer in making your own luck, and karma. With wildlife photography you’ve got to be up very early, be very patient, very quiet and very sensitive. And you’ve got to do your research into the animal. If you’ve done all of those things, it’s strange how much luckier you get. When a cheetah is walking past with a belly that’s concave with hunger, and 500 metres ahead there’s a fallen tree or big termite mound, you position yourself there and wait, hoping. You’ve got to try to predict. Frequently they let you down [laughs], but not always, and if they do, get over it, quickly.

Where are you mostly based throughout the year?

I live in the UK but I divide my time between Kenya, the Pantanal in Brazil, India, and I do a lot of work in the Poles on chartered icebreakers looking for polar bears and penguins among the icebergs and glaciers.

Which part of the world have you found most exciting as a wildlife photographer?

Spitsbergen. It’s just magnificent. There’s 24-hour daylight, so you’re never short of time, if you’re prepared to maximise it. And, there’s something about finding a polar bear on sea ice that’s a narcotic. I love that, as well as the extraordinary glaciers and incredible colonies of hundreds of thousands of birds, not to forget Arctic foxes and walruses. The other is South Georgia in the Atlantic where there are six million plus king penguins, which is just incredible. 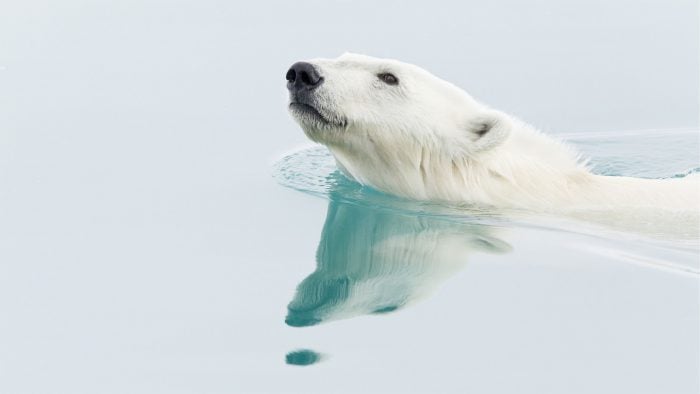 Is there any wildlife you haven’t seen yet that you really want to seek out?

I haven’t seen a clouded leopard, which is one I’d really like to photograph. I have seen a snow leopard though. I would like to see more of the animals I’ve already seen in even better circumstances. I’ve never seen lions bring down a buffalo, which I know a lot of people have. That would fascinate me.

There’s no such thing as a perfect wildlife photograph though, and this is why I spend so many hours, days, months and years striving for a bit more. The perfect photograph has never been taken because there’s always some way of improving it, but that’s what makes this activity such an attractive mistress.

What would you say your most remarkable wildlife encounter has been?

The year before last in Spitsbergen, there was a bird colony of what must have been quarter of a million guillemots and kittiwakes. In this prime avian real estate, we saw a polar bear climb up the cliffs – vertically – looking for eggs. It was utterly remarkable. We knew we were seeing something that was wrong, as a polar bear shouldn’t be behaving like that – global warming is the culprit – but it was extraordinary and very sobering. Last week I saw a newborn giraffe being eaten by a lion. There’s no triumph over it, but nature is red in tooth and claw, and we shouldn’t try to put our own human characteristics across animals; they’re just not like us, thankfully.

I always discuss wildlife photographs or holidays in terms of moments. I spoke to someone who had been on safari with me nine years ago. They remembered getting up at 4:30, driving a long way, then just before dawn finding a cheetah with tiny cubs. As the sun came up, the five cubs stood on a termite mound, all in a row in front of their mum for a few seconds. She remembered nothing else from the safari. As I say, good safaris are about moments, not a dull accumulation of creatures. 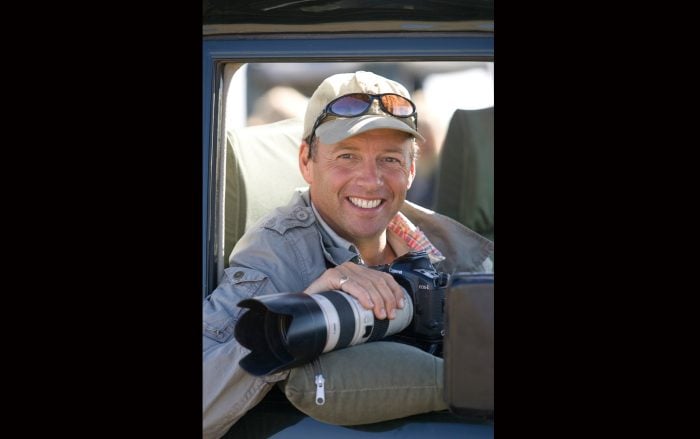 Have you had any close calls with nature?

Not really. It should never happen if you’re behaving correctly. I’ve been charged by rhinos – once in Nepal and once in Zimbabwe – but there were easy-climbing trees nearby, so there was no danger really. The rhino picked up my wind, as it were, and climbing the tree wasn’t an issue.

I’ve come across animals walking back to my tent in the dark, when my torch light has picked them up, but they are almost always more scared of us than vice versa – certainly predators. The only animals that scare me are elephants and buffalos because they really are dangerous. You just need to behave with a great deal of caution – always.

Do you have any tips for amateur photographers who want to take better wildlife photographs?

Number one: I’d love to say it’s not down to the gear, but don’t go out with a basic camera and kit lens, expecting great photos. You don’t have to buy it; hire it.

Number two: Be prepared to fail. Be bold with your photos and don’t just take a ton at a fast shutter speed. Try something elaborate and out of the ordinary.

Three: When you pick up the camera, imagine every photo is for a calendar. People have to look at that for a month.

Four: Research. Do your research into the animal and the safari or expedition you’re on. Don’t get out there and say if only I’d known.

Five: Last one and most important, practice at home. It’s like skiing; you can’t expect to go for one week each year and get better. If you practice, you’ll be ready when you get out there. And, British wildlife is a lot harder to photograph than it is out in the Maasai Mara or Spitsbergen.

You focus on landscape photography too. Which part of the world has most blown you away aesthetically?

Antarctica and Spitsbergen are staggeringly beautiful, and the mountains in Nepal are utterly beautiful too. There are other areas that fascinate me in terms of landscape. I love taking photographs of the plains in Africa because you get that precious light. And I like photographing the Northern Lights in Norway and Iceland, which I do once a year.

If you can combine wildlife with a great landscape, you really do have something special. The Mara is open country with a healthy population of predators – the Mara Conservancies have the only growing population of lions in East Africa.

What are your upcoming travel plans?

I’ll be in Norway for the Northern Lights in three weeks, then I’m doing a trip to Sri Lanka where I’ll hopefully be getting into the water to photograph sperm whales. I’ll be on a couple of safaris in Kenya and then in November I’m going to Antarctica and Spitsbergen with Chris Packham.

Keep up to date with Paul’s expeditions and photography at www.paulgoldstein.co.uk.