Aside from being one of the world’s top trekking destinations, the diverse landscape of Nepal is also home to bountiful wildlife, with the rare chance to see the regal Bengal tiger in its natural habitat. As the first national park to be established in Nepal, and now a UNESCO World Heritage Site too, Chitwan National Park encompasses 932 square kilometres of subtropical inner Terai rainforest across south-central Nepal’s lowlands.

This dense jungle’s most famous predator is the Bengal tiger, which roams the alluvial floodplains, while on the peripheries of the park the more allusive leopards can be seen, as well as wild Asiatic elephants and Indian one-horned rhinoceros.

The most common sightings though are of the park’s abundant wild boar, sambar deer, chital and antelope, among over 40 other recorded mammal species. Winding its way through this land, the Narayani-Rapti river, along with its tributaries and oxbow lakes, are home to freshwater crocodiles and 113 species of fish, with otters to be seen in the smaller creeks and rivulets.

The park’s impressive array of reptiles includes the king cobra, rock python, starred tortoise and monitor lizards, plus there are over 543 bird species, making it ideal for bird enthusiasts.

Seek out Chitwan National Park’s wildlife by taking guided treks, canoeing along its waterways, or by taking an elephant or jeep tour. 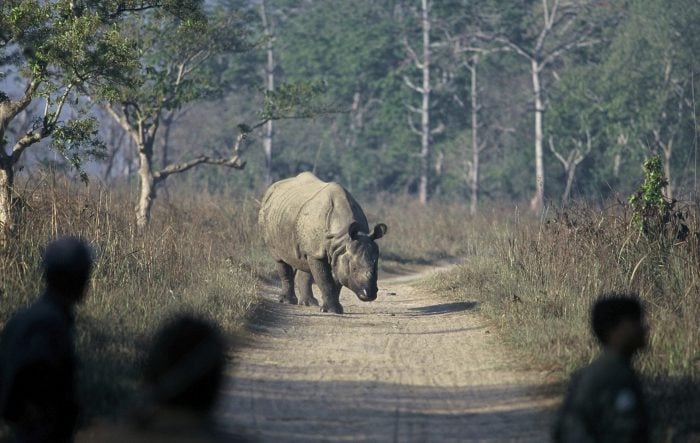 Blanketing 968 square kilometres of western Nepal’s terai, Bardia is the country’s largest national park, as well as being the most undisturbed.

This savannah, grassland and riverine forest is one of the largest Bengal tiger habitats in Asia, but it is also the roaming ground of over 50 other mammal species, including the one-horned rhinoceros, wild elephants and swamp deer.

In the park’s waterways both crocodiles and dolphins can be seen, and if you take a closer look between the trees, you’ll spot some of the 23 reptile species and 407 bird species that have been recorded in the region. Axis deer, which can be seen in Chitwan and Bardia National Parks.

The Annapurna conservation area in western Nepal ranges from subtropical to alpine, with diverse scenery from bamboo forest to windswept desert.

The diverse environment is home to over 100 mammals, 478 types of birds and 39 reptile species, among which snow leopards and red pandas are the most elusive. Musk deer, blue sheep and pheasants however, are all commonly seen while trekking through the region. The elusive red panda, which can be found in Annapurna and Sagarmatha National Park. Sagarmatha National Park protects 1,244 square kilometres of the Everest region; a dramatic landscape of glaciers, valleys, and rugged mountains, including the world’s highest peak Mount Everest and seven other mountains that rise to over 7,000 metres. From the lowest point to the highest altitude, the land has six types of altitudinal vegetation from oak forest to lichens and mosses.

The national park is an important region for birds, with over 150 different species, including some that only breed at high altitude and Nepal’s national bird, the Himalayan monal.