In the wilderness of East Iceland, Meera Dattani saddles up and finds out why Iceland’s fiercely protected horses are quite unlike any other.

He even looks like a bit of a rebel, standing apart from the rest, peering over with those big eyes, body the colour of milk chocolate, and an unruly shock of brilliant blond for a mane. It’s as if he’s too cool for school.

The thing is, these horses are a bit special. Icelandic horses are the ‘beautiful people’, the supermodels of the equestrian world. Brought over to Iceland by early Norse settlers in the 9th and 10th centuries, a thousand years of no cross-breeding has resulted in the world’s purest breed. Some might resemble ponies, but don’t mistake stature for a lack of strength. Prized in Norse mythology, these are hardy creatures and natural selection wiped out many who succumbed to Iceland’s extreme climate. Super-strict Icelandic laws also keep the animals almost disease-free. There is no importing of horses, and exported Icelandic ones can’t return.

They’re also unique, and that’s not a word that’s always technically true. But these are the only horses in the world with five gaits. Most have three – walk, trot and canter/gallop. A handful have four, but only these horses have five. At the Wilderness Centre, Denni Karlsson and his wife Arna Björg Bjarnadóttir, offer riding tours on their Icelandic horses. The centre is part-accommodation, part-cultural hub and part-activity centre in a secluded valley, 50 kilometres southwest of East Iceland’s main hub of Egilsstaðir. 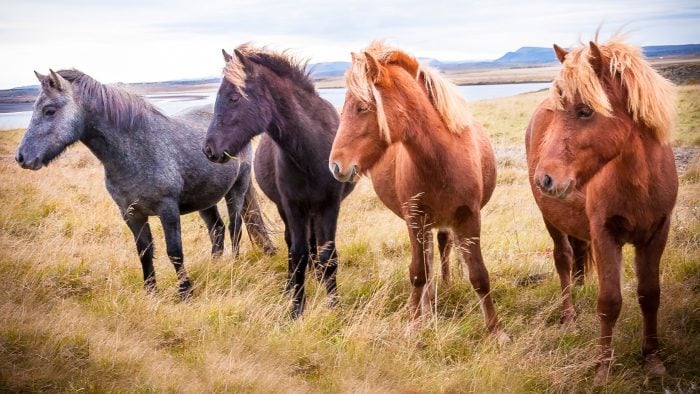 “They’re really tough,” says Denni. He introduces us to Klaki, a beautiful white stallion who went missing a year ago. “One of my farmer friends borrowed him to round up his sheep but lost him. We went hiking, riding and even up in a small plane to look for him.”

To no avail. “Klaki wasn’t raised in the east,” Denni adds. “I thought his natural compass would have led him to his home, the other side of Vatnajökull glacier but no.” 11 months later, Denni received a call from a hunter. He’d been looking for reindeer in the central Highlands but noticed an animal that looked too large to be a reindeer. He also happened to remember that Denni had lost a white horse the year before. “I went up to the highland plateau and found him,” says Denni. “Klaki came trotting over when he noticed me. He was in great shape, as though he’d been lost for a day… It’s amazing how he’d survived the harsh winter.”

It’s quite a story and testament to their resilience. They feel sturdy, as we trot through this snowy, magical wilderness, sticking to the first three movements; even the canter is thankfully tame. A more experienced rider tests out the fourth gait, tölt (tolt). It’s the same sequence as ‘walk’ with at least one foot on the ground at any time. The post-ride report is affirmative. “You don’t bounce up and down in the saddle, it’s quite comfortable.” Skeið or flying pace, is another thing. Not all Icelandic horses have this fifth gait, but the ones which do are the only horses in the world to have it, where the legs on the same side move together to create the illusion of flying. ‘Flying’ and ‘pace’ sound wholly unappealing. We just take Denni’s word for it that it’s ‘really nice’ and carry on trotting.