Japan brings to mind two very distinct images. There’s one of a hyper-modern society with concrete towers filling the skyline as far as the eye can see. Businessmen and women chirp away on their phones as they get off the train and over to their next meetings. Large screens flicker around every corner. In some cases it looks as if Times Square was used as a model by a designer who thought it was too modest. It’s never quiet here. There’s always the sound of footsteps, trains, buses, cars and chatter. Fresh air and greenery are hard to come by, but people are too busy to notice anyway.

Then, there’s the other side of the coin (or yen, I suppose). There’s the cinematic side of Japan with images of rural surroundings playing like a movie montage in a traveller’s imagination. What sticks out first is the architecture – it’s unlike anything in the Western world and feels distinctly Japanese. Next, one might think about the signs featuring a mixture of Chinese Mandarin and Japanese Hiragana and Katakana characters. That fresh air so noticeably absent from the city? There’s an abundance here, but you’re too busy taking in the mountains, hills and streams to notice the lack of exhaust.

The latter is, by some accounts, quickly disappearing. Alex Kerr noted his grumblings with the modernisation of rural Japan in his wonderful book, Lost Japan. Still, to the untrained eye, hiking in rural Japan feels remarkably foreign and disconnected to the modern world. Like any other first-time traveller to Japan, I wanted to experience everything. I wanted the chaos of the city, but also an opportunity to stretch my legs in storybook surroundings. To get my fix of greenery, I embarked on a six-day hike along the centuries-old Nakasendo Way.

The Nakasendo Way retraces one of the five highways of the Edo period (1603 – 1868) that linked Kyoto to Edo (present-day Tokyo), planting approximately 534 kilometres (332 miles) of ishidatami (stone paving) across the scenic Japanese countryside. Living up to its translation, the Nakasendo (? = central; ? = mountain; ? = route) travelled inland through occasionally rigid topography. That said, it was still a well-developed road for its era and didn’t require fording a single river. Thus the route became popular among Japanese celebrities, such as the 17th-century haiku master, Matsuo Basho.

Today, most of the original ishidatami paving is gone, replaced by more modern thoroughfares and marked hiking trails. I joined my group, led by an experienced young woman named Hiromi, in the nondescript city of Ena. It also happened to be the same day as a popular Nakasendo road running event. We passed runners along our route (comprised entirely of the modern road network), offering a hearty Ganbatte! (roughly translating to ‘good luck’) in a way only enthusiastically loud American tourists can. The more modest Japanese seemed to appreciate the support.

After 12 miles of pounding over (mostly) pavement, your joints feel it regardless of age or arthritic standing. But the soreness faded as my senses focused on those storybook surroundings. The quiet, historic post towns, countless streams, rolling hills, mountains and changing autumn leaves – there was no reason to complain. 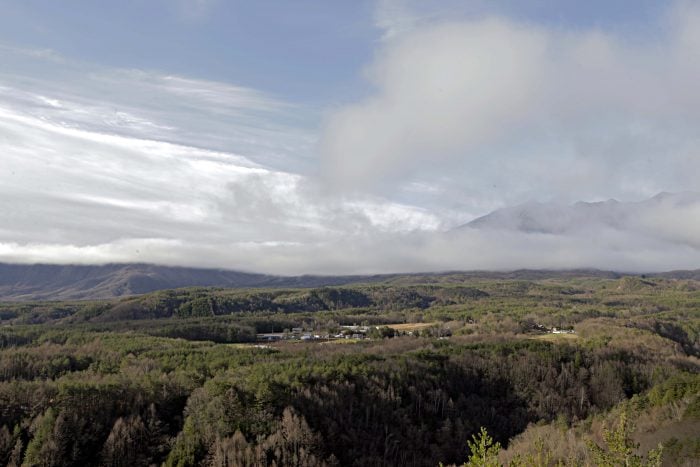 We continued over the following days through the Kiso Valley, which features some of the most popular sections of the Nakasendo Way. Translator William Scott Wilson’s recently released Walking The Kiso Road proved to be a popular companion piece for my fellow hikers looking to contextual their walk with the area’s deep history.

Distances varied typically between eight and 14 miles, though there were a couple of three-mile days that offered a much welcomed respite. Particularly rough outings ended at a Japanese onsen – a traditional public bathing facility included in many of the inns. Bashful men and women need not apply as one cleans oneself on a short stool before dipping into the steamy hot bath. At least they’re divided by sexes. At times we hopped on a train or bus, straying from the Nakasendo to take in some other popular sights, such as the stunning Karasawa Falls. We all agreed it was worth the deviation from the main route. However, nothing proved as endearing as a stop at a small restaurant overlooking the incoming rain showers on the mountainside. Our hosts were an older couple with a love for entertaining dining guests with their own musical performances – although it became clear that the older gentleman’s true passion was in showing off his miniature train set. His wife played ‘Camptown Races’ on the harmonica as he showed off his creation. The final day’s hike was not the greatest, Hiromi admitted. Almost exclusively downhill, it proved challenging on shaky knees. Still, it needed to be done, so Hiromi strapped her trusty bell to her shoe, clanging with each step to warn any lurking bears of our presence, and we marched down to little Yokokawa. As if on cue, the clouds broke once we finished our descent. All that remained was a simple stretch of flat gravel trail alongside the train we would be taking to start our journey to Tokyo. Arriving in Tokyo, the stark contrast was complete. The postcards of rural Japan gone, we were now in one of the most organised yet chaotic cities on the globe. Connecting trains arrived right on time as floods of Japanese people expertly navigated what otherwise appeared to be a cacophony of rail maps and station tunnels.

We emerged from underground just east of Tokyo’s famous Imperial Palace Gardens for a short walk amongst millions of others doing the same, though not dressed in smelly hiking gear. The Nakasendo from Kyoto to Tokyo was complete. Sure, I didn’t start in Kyoto nor did we truly walk every step, occasionally opting for more modern forms of transportation, but as Tokyo clearly shows, it’s not the 17th century anymore.