Our Guide to the Great Migration

From when to travel to where to stay, we answer all your questions about how best to witness the ‘Greatest Show on Earth’. 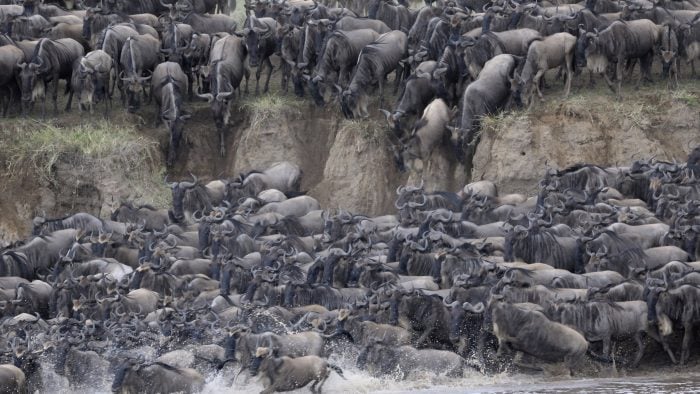 The Great Migration is undoubtedly one of the world’s most incredible natural occurrences. It’s a once-in-a-lifetime safari that you need to get right first time – and that’s where Jacada Travel come in.

Around 1.5 million wildebeest, 400,000 zebra and 200,000 gazelle embark on a relentless migration that sees them following the rain throughout the year, travelling in a clockwise direction around Tanzania’s Serengeti National Park and Kenya’s Maasai Mara Game Reserve. 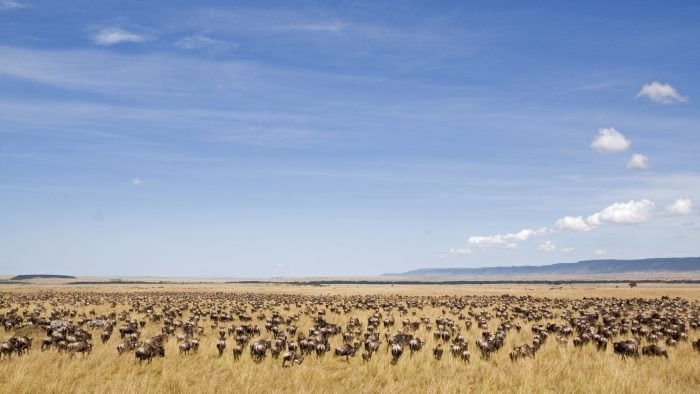 Often the Great Migration and movements of the herds can be unpredictable and the draw of such a huge wildlife attraction can mean jostling for space with other vehicles. We handpick the most exclusive, competent and comfortable camps for their expert teams of guides and trackers (as well as their position) to get you a front row seat to the spectacle without having to share it with herds of humans too.

For several months, the gigantic herds are thundering through the plains, crashing across rivers,  escaping the jaws of hungry crocodiles and outmanoeuvring prowling lionesses, before they reach the safer land of the south east Serengeti where they feed and birth for the remainder of the year. No wonder the migration is often referred to as the ‘Greatest Show on Earth’.

A migration safari should be on everyone’s bucket list, but make sure you do it properly. Let us give you the best advice for witnessing this phenomenal spectacle. Read through this guide for an overview and then get in touch with us to go through the details of this trip of a lifetime with one of our safari experts. 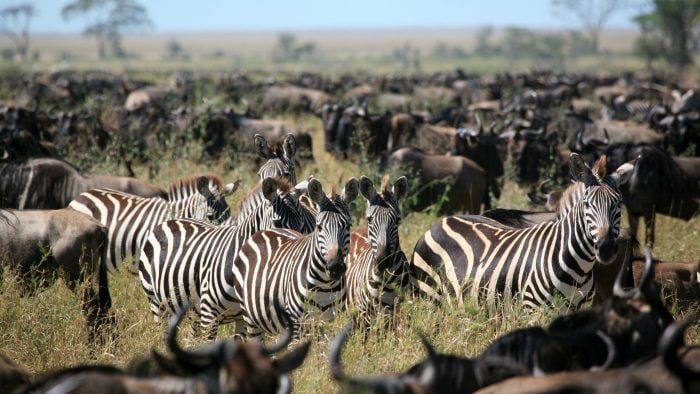 When should I travel?

You can see the migration all year round. Exactly when you travel will depend on what you want to see. The only time we advise people not to travel is April and May, when both Tanzania and Kenya experience a long rainy season.

December – April: Wildebeest calf in the grasslands of the Serengeti, Tanzania, around February. Around 300,000 calves are born each year, as the herds move around the south east Serengeti, munching the nutrient-rich grass. The short grass also means they are safer from predators.

April – June: The Serengeti begins to dry up. The wildebeest start to travel north, up through the Grumeti Private Reserve towards the Maasai Mara, where it is starting to rain.

July – October: From August until October is when most river crossings take place and is the peak season for migration safaris. The herd have to traverse the Mara River, as they cross the border from Tanzania and into Kenya’s Maasai Mara National Park. They face threats from crocodiles, lions – and people.

October – December: The herd starts to move south and curve back into Tanzania, once again following the rain.

Although we know roughly the route of the migration, it cannot be predicted: the wildebeest follow the rain and the weather is an unreliable force of nature. Exactly when they will reach a certain point is not an accurate science and there are also several ‘splinter herds’ that take off from the main group. 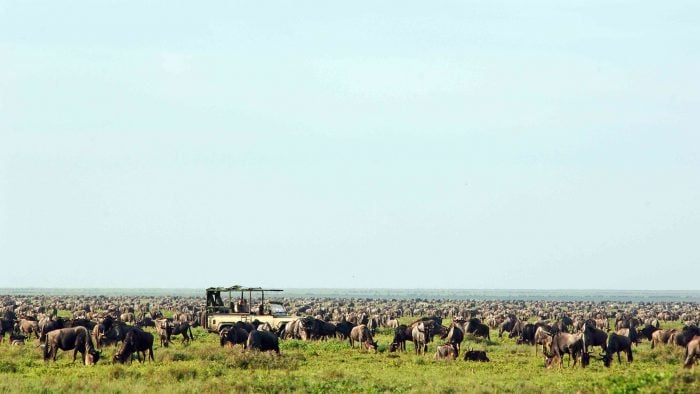 Where should I stay to see the migration?

Due to the unpredictable nature of the migration, a mobile camp is by far the best accommodation option for at least part of your trip.

Mobile camps are the ultimate in detox safaris: with no WIFI and electricity, you’re forced to switch off your phone and get some one-on-one time with nature. Whilst the camps are far from basic – with Persian rugs and four-poster beds – they won’t be the luxurious accommodation you’d usually expect. However, the value of mobile camps is that they base themselves wherever the herds happen to be, so you’re almost guaranteed a migration viewing.

Which mobile camp you book will depend on what time of year you’re travelling and what you hope to see. Get in touch with us for our recommendations. 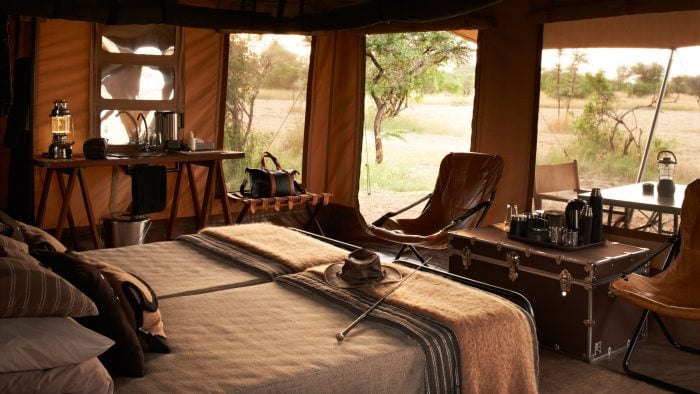 We suggest you pick two bases and split your time across the two locations, thus increasing your chances of seeing the migration and river crossings.

Our favourite combination is a mobile camp followed by a luxurious lodge: you can track the migration in camp, during which time you’ll have the best chance of seeing the herds, and then spend the next couple of days relaxing at your lodge, with some game drives to visit the wildebeest at a different stage of their journey.

Will I be able to see a river crossing?

River crossings are the most popular part of the migration, due to the high drama made famous by various National Geographic documentaries.

The wildebeest must cross the Mara River on their journey from Tanzania’s Serengeti to Kenya’s Maasai Mara. It’s a perilous passage that sees many of the herd lost to the crocodiles that lurk in wait. For that reason, do bear in mind that whilst a river crossing will always be a dramatic and exciting affair, it might not be particularly pretty. 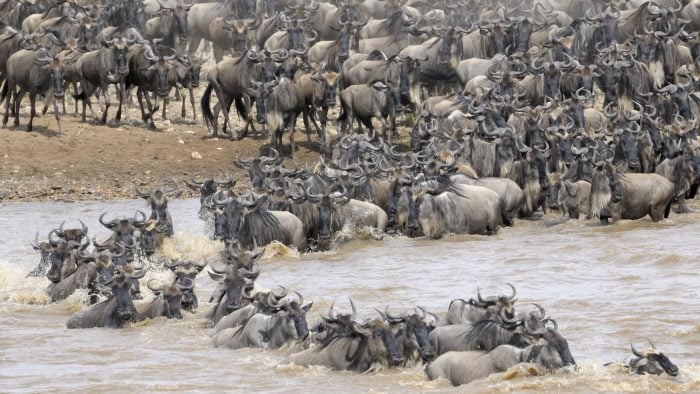 You can see a river crossing if you’re travelling around the Tanzania-Kenya border from August to October. However, even if you arrive at a river exactly as the herds gather on the bank, they might simply stand there for a couple of days, nervously waiting for the first wildebeest to make the jump.

However, travelling around the correct time of year, booking with our experts, and staying in mobile camps will hugely optimise your chances of seeing the huge herds of wildebeest crash across the river. There are pros and cons to seeing the migration in either Kenya or Tanzania.

With Kenya, you stand a much better chance of seeing the migration and river crossings, due to the concentrated route of the wildebeest through the country. The Maasai Mara is also much more accessible, as you can fly straight there from Nairobi, arriving within a day. A further plus is that this is a wonderful area for the Big Five (lion, buffalo, leopard, elephant and rhino), so you’ll have plenty to keep you occupied besides the wildebeest. 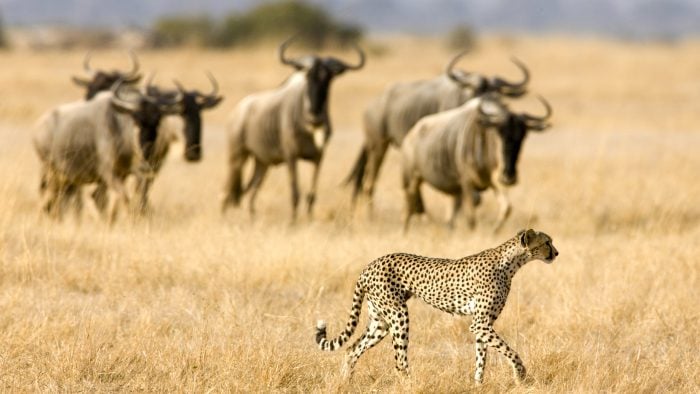 Tanzania’s Serengeti isn’t as easily accessed, but it is much, much quieter and free of crowds. Here, you could have a river crossing or migration sighting all to yourself, perhaps shared with one other vehicle. It is also where the wildebeest spend the majority of their year, so you’ve got much more flexibility; the wildebeest are only in Kenya’s Maasai Mara during August and September.

The Mara river crossing was almost a private viewing. Perhaps the best decision was to have our guide, Robert, stay with us for the week. He knew everything. Certainly about the wildlife but he also enriched our experience through his knowledge of his country, the culture, history, traditions, the Maasai and politics. Our tented camp was beautiful and had a wonderful charm. Of course it was luxury camping, but we still felt like we were staying out in the Serengeti in the wild. The whole experience was magical, from the noises at night and the fresh air to the fact that beyond the undefined borders of the camp there was nothing but wildlife. Unforgettable! 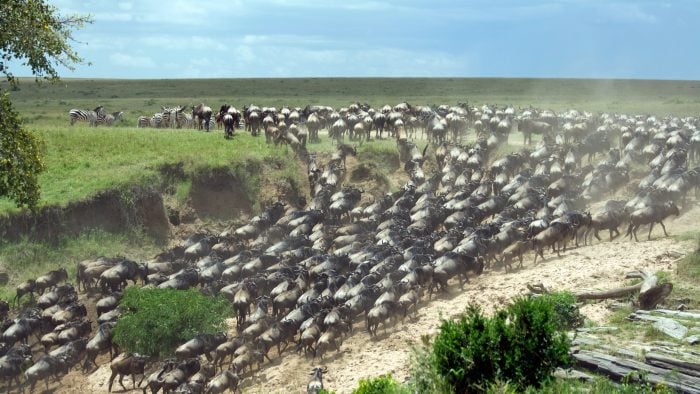 How can I plan my migration safari?

Our Africa safari designers were all brought up in Africa and been on more safaris than they can count.  We create bespoke luxury safaris crafted for  your individual needs and using our own first-hand experience to recommend locations, lodges and camps that we know you’ll love.

These are some of the ways our experts will make sure your Great Migration safari is a trip of a lifetime:

·         Find the best camps and lodges for your requirements, time restraints and budget 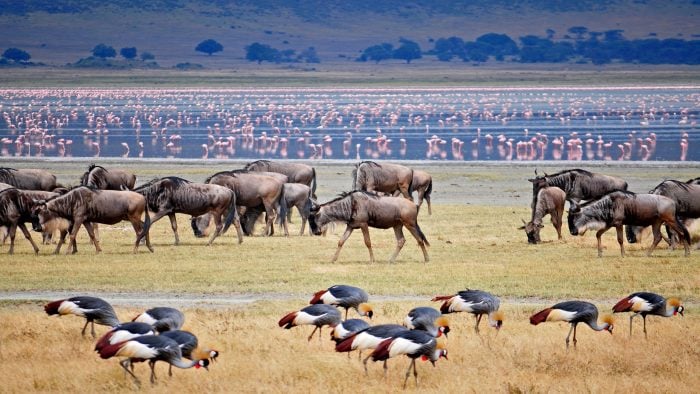 Contact us to find out more about your migration safari.