From Argentina’s wine country to South Africa’s Garden Route, some of the world’s most verdant spots celebrate the local produce that they have become so well known for. 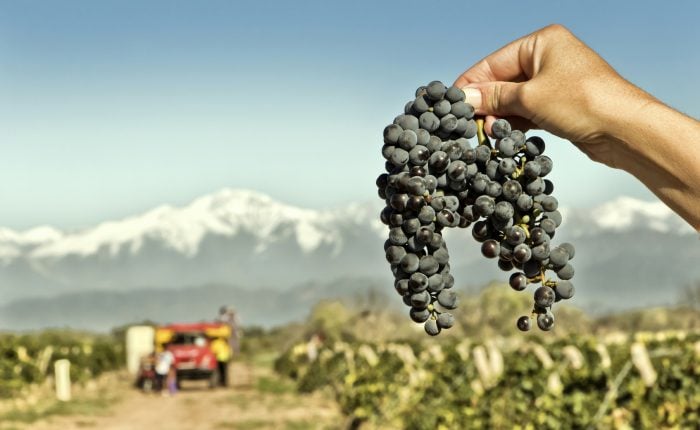 1. Grapes of the Mendoza province

Attracting as many as 2,000 people to Argentina‘s wine region, Mendoza Grape Harvest Festival is the culmination of smaller celebrations that take place throughout the region in the summer months. While bringing grape growers and wine makers together with both the community and visitors, the festival is a whirlwind of parades, firework displays, performances and wine tasting. The festival is hosted in the city of Mendoza each year in March.

Explore Further: Explore more of surrounding wine region by hiking, cycling and visiting the many wineries that are dotted throughout the land. In the lush wilderness of Punta Gorda, you’ll find Mayan temples, waterfalls and caves, as well as agricultural land with chocolate producers, who claim the region’s terroir gives their chocolate its unique flavour and aroma. To celebrate their cacao and chocolate products, Toledo hosts The Chocolate Festival of Belize each May, centred around chocolate and wine tasting. A street fair, chocolate tours, music and cultural performances, and cooking competitions all take place, with a fireworks display over the sea.

Explore Further: Go from the rainforest of Punta Gorda to Ambergris Caye on the Caribbean coast.

Close to the historical city of Cuenca, Gualaceo lies at 7,446 feet above sea level in the valley of Santa Barbara, with the Santa Barbara, San Francisco and Guaymincay rivers flowing by. This small town thrives on its agriculture, with handicrafts and tourism adding another string to their bow, and each March it hosts a celebration in honour of its peach harvest, with street parties and peach tasting to take part in. The Fiesta del Durazno gives visitors the chance to join the local community in celebrating their heritage and the fruit of their land.

Explore Further: Wander along the cobbled streets of the nearby city Cuenca to seek out its heritage and historical sites. The small rural town of Fraijanes, which is located just outside Guatemala City, comes alive each February as the community celebrates the arrival of the region’s coffee harvest. Beginning with the procession of the Virgen de Candelaria, the three-day event encompasses parades with lots of dancing, plenty of food and, of course, local coffee to try, before finishing with the celebration of El Sagrado Corazon de Jesus. The festival is a unique opportunity to experience local culture and celebrate this community’s traditions.

Explore Further: Travel across the other side of Guatemala City to the UNESCO World Heritage city of Antigua. The small port town of Hofn – meaning harbour – is set in the Hornafjordur fjord of southeast Iceland, and as the gateway to the Vatnajokull ice cap is a part of many travellers’ journeys. The fishing town is also where most of Iceland’s lobster is landed, so each July, the town celebrates this by hosting a lobster festival. Both locals and tourists gather together to eat, drink and immerse themselves in the entertainment on offer. As well as the chance to eat lobster prepared in a number of ways, watch the festival’s parade and see live performances.

Explore Further: From Hofn, take a tour of the spectacular Vatnajokull ice cap. Tucked into South Africa’s Free State province, the town of Ficksburg has become known as the cherry capital of the world, so each November the community hosts a cherry festival that incorporates events such as the Cherry Jazz Festival, Cherry Bowls Tournament, Ficksburg Marathon and the Cherry Mountain Biking Challenge. Competitions, sports and workshops – including classes on cooking with cherries – are all on the agenda, plus there’s live music on the festival’s main stage.

Explore Further: Combine your visit to Ficksburg with exploration of the exciting city of Johannesburg. 7. Crayfish on the Cape West coast

In the coastal town of Lambert’s Bay on South Africa’s Cape West Coast, the crayfish festival Kreeffees is held each March. Aside from eating what’s been cooked up, try your luck in a crayfish diving competition, take part in a half marathon and go bungee jumping. The three-day event has a solid line-up South African musicians in concert, too. The 10-day Knysna Oyster Festival in July appeals to both foodies and sports enthusiasts with over 100 activities and events, attracting over 50,000 people each year. The main event is of course shucking oysters – as many as 150,000 are eaten during the festival period – but there’s also a marathon, a number of sporting competitions, whisky and jazz cruises and an oyster ball, plus performances by comedians and musicians. You can pick up a map to follow the trail of Knysna’s restaurants that are each serving up oysters in a variety of ways.

Explore Further: From its location on The Garden Route, Kynsna is just a short distance from Plettenberg Bay, which is a famous spot to see the whales that pass through. Luckily, South Africa’s whale watching season coincides with the oyster festival.