TV travel host Henry Golding tells us what it was like to grow up with Sarawak’s Iban tribe and reveals the places he rates highest in Southeast Asia.

TV host and travel presenter Henry Golding is known for bringing us travel shows, such as Without Boundaries – documenting his journey to tackle some of Malaysia’s most challenging environments from its highest peaks to the depths of the surrounding sea – and Driving Change with Caltex, in which Henry crossed five countries with three days in each to complete a charity challenge in collaboration with Nat Geo and Fox TV channels. With a fascination for travel and culture, Henry was led along this path by an upbringing of diverse cultural influence. With an English father and mother from the Iban tribe of Sarawak, Borneo, the TV presenter experienced both ways of life, learning from each one. He is now based in Singapore and Malaysia.

Did you spend much time in Malaysia as a child?

I was born in Sarawak but as a toddler I grew up in Terengganu on the east coast of peninsula Malaysia. We would be at the beach almost everyday after school, so I certainly had a sense of freedom as a child. 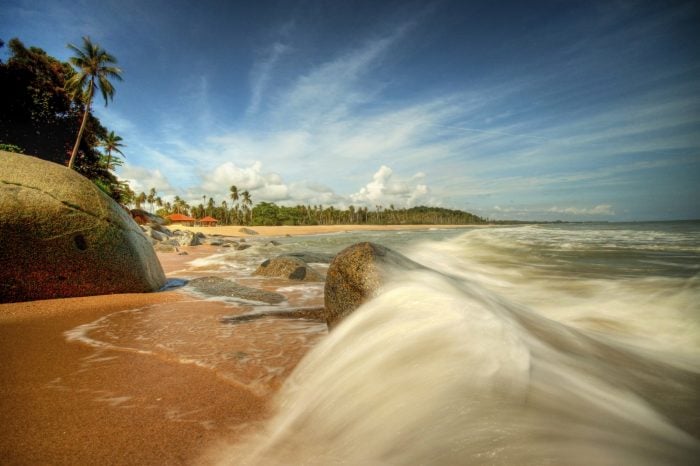 What was your experience of the Iban culture when you were growing up?

For me the Iban culture was something I grew up with and that was always there, yet it wasn’t until I moved to the UK when I was eight-years-old, that I started realizing I had something really special. I remember when our longhouse by the river didn’t have any electricity and was lit by oil lamps, and how if you wanted meat for dinner you would have to head to the chicken coup and kill one yourself. Luckily my uncle Bruin was the hardiest man I knew and a real Iban survivor. He could thrive in any jungle environment with only a knife for company. There were stories of him being attacked by a crocodile whilst wading across a river. Lets just say he came off better than the croc. I see the Iban as strength and resilience personified. Have you spent much time in Sarawak since that time?

I go back fairly often; my mother spends four to five months of the year living in Sarawak, so I try to visit when she’s there.

What do you think is most appealing about that region for travellers?

That would have to be the sheer magic of the land. Many people there believe in Animism and spirits, so to travel and spend time with the tribes deep in the Ulu can be quite the awakening. 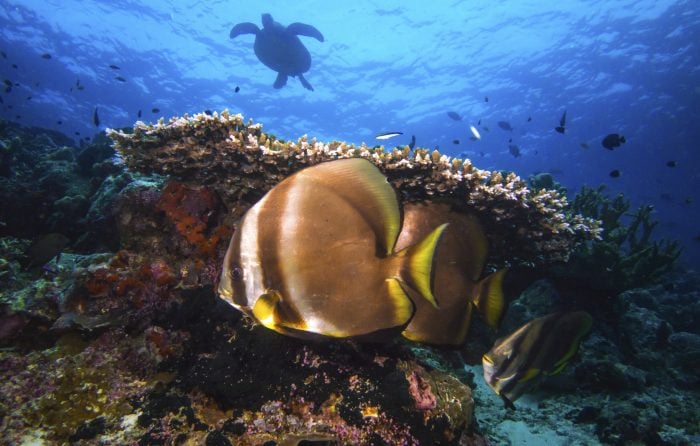 Through your TV shows, you’ve travelled a lot of Southeast Asia. What have the highlights been?

I think the islands of Sabah hold a special place for me. Diving and being in the water is one of my favourite things to do in life so visiting places like Sipidan, Mabul and Kapalai is just exquisite.

Where were you most struck by the beauty of the scenery?

I am always dumbfounded by the natural beauty of the southern islands of Thailand, and how the karst rocks jut from the green and blue marbled coastline. Taking a little boat to venture around them is just blissful. On your travels, where have the local community had the biggest impact on you?

I think it would have to be when we filmed in Tacloban a month after Typhoon Haiyan hit. To see the sheer destruction that mother nature caused on that island was surreal; it was as if the island was upended, like a fully set table. All of the shanty houses along the coast were destroyed leaving thousands of under-privileged Filipinos homeless. But the overwhelming sense of ‘we will not be defeated’ was plain to see. They have a tremendous way to go, even a year after the disaster, but if anyone can pick themselves up after being punched in the gut, it’s the Filipinos.

From your series ‘Without Boundaries’, which mountain was the toughest, and which did you enjoy the most?

We climbed Gunung Tahan which means ‘To Indure’; definitely testament to the five-day four-night trek. It didn’t stop raining the entire time we climbed, so the mud was above our knees at times. It was a literal scramble to the top as we were on all fours in some sections; we had to climb parts of it using the roots and trees to pull ourselves up near vertical routes.

The one I enjoyed the most had to be Kota Kinabalu. That feeling of reaching the peak and setting your eyes on the new day as the sun rises is indescribable. What’s the most challenging moment been for you throughout your travels?

My most challenging moment throughout my travels was when I faced the death of a young boy whilst spending time with the Ruamkatanyu of Bangkok. They are a volunteer first response unit who clear up and attend to traffic accidents. Most of the incidents we were called to were cases of drink driving, but one that stood out was a young lad of 13 who wasn’t wearing a helmet whilst racing on a motorbike with his friends. He perished five minutes before we arrived. That moment was heart breaking.

Which one place would you recommend travellers to go in Malaysia?

Visit the Jakun tribe in Tasik [lake] Chini in Pahang. If you catch a boat at the right time, during sunset, the water on the lake becomes a mirror that reflects the flowers of the lily pads and the colours of the setting sun.

Where do you want to go next?

I would love to venture to Indonesia to explore more of it, as well as the Philippines, and I’d like to head towards Papua New Guinea. Do you have any upcoming TV shows or travel plans?

I have a pretty packed couple of months, with Hong Kong, the UK, Sri Lanka, China and India all on the cards.

I have a show airing on 8TV in Malaysia starting on January 15 called Welcome to the RailWorld Japan. We spent two months travelling non-stop across the length and breadth of this beautiful country. I am very proud of that one, as the series looks fantastic.

I’m filming a new series at the moment with Channel News Asia called Love Asia, in which I investigate how love has changed and evolved within cultures in this day and age. That will be coming out in the first quarter of 2015  on The Travel Show, which airs weekly on BBC World News and BBC 2.

Henry Golding is a FLY Entertainment Artiste. Find out more about his work at www.henrygolding.com.