From a seaplane flight over the mesmerising Halong Bay to discovering the secrets of the Mekong by bicycle, every moment in these two dynamic Southeast Asian countries made for an incredibly diverse adventure.

Not far from Phnom Penh, we cycled to a Buddish pagoda to catch a glimpse of the lives and traditions of the local monks there. They prepared lunch while the younger boys helped as part of their training for monkhood. Eating in Southeast Asia is a pleasure for all the senses, and this buzzing local restaurant in Phnom Penh was the best dining experience I had in Cambodia. The spread included fish soup, curries and meat dishes.  For the ultimate condiment we squeezed fresh lime into pepper and salt to make a moreish paste. Slowly being swallowed by twisting tree roots, Ta Prohm is undoubtedly the most mystical ruin at Angkor. My guide Kanha was born and raised in Siem Reap, and she brought this ancient temple to life with her knowledge. She also knew the best photo spots. A must-visit temple at Angkor is Bayon, which dates back to the 12th century. My guide Kanha captured me ‘touching’ noses with one of the 216 colossal smiling faces featured on its towers. Set within eight acres of gardens and paddy fields, Phum Baitang was a lush haven in Siem Reap. I stayed in one the pool villas at this ‘green village’, which has a complete working farm with water buffalo and meals prepared using organic ingredients from its gardens. The architecture of Hanoi is not like any I’d seen before. There used to be tax laws based on the width of a building, so to get around it the locals built upwards. This explains why you see some almost inconceivably narrow houses in this alluring capital city. Exploring the old quarter of Hoi An on a walking tour led us to the old Chinese Assembly Hall. The incense hanging at its entrance protects the temple from bad spirits and takes three months to burn out. The smiling Miss Sen in the middle of this photo was our wonderful local food guide in Hoi An. She introduced us to some of the best street food at the local markets, including this vendor who was selling tasty ice creams from chilled metal cylinders. My only beach stop in Vietnam. Relaxing by the extensive main pool overlooking the sea at Nam Hai hotel was bliss at its best. A scenic seaplane journey ended with 15 minutes over the spectacular Halong Bay, known in ancient Vietnamese as ‘descending dragon’. After exploring the bay by boat it was extraordinary to see it from the air, with the misty weather creating even more awe. On a fresh morning in Saigon (Ho Chi Minh City) we started at 6am at the bustling flower market, which was already lively with locals buying flowers for ceremonies and gifts. For an alternative view of Saigon I took a private speedboat through various districts of the city. Travelling past slums and stilt houses gave me a glimpse of life on the water’s edge. It ended with a glowing sunset over downtown. 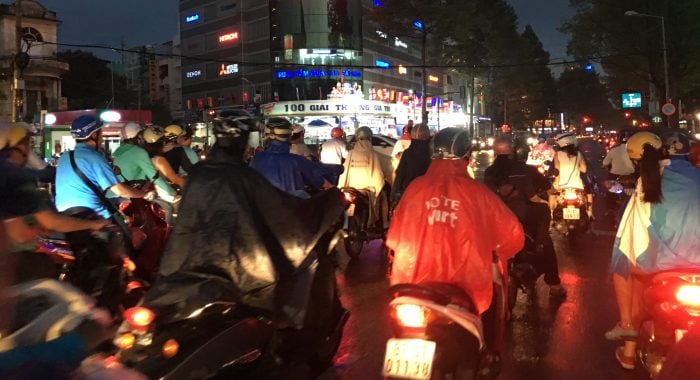 There are few more authentic experiences of the humming city of Saigon than getting amongst its chaotic but surprisingly fluid traffic. All the locals were wearing rain ponchos as I ventured on the back of a Vespa for a memorable tour of street food.