Kathmandu and Beyond: An Insider’s Nepal Travel Tips

The expert in yoga and sustainable adventure travel in Nepal, Sam Voolstra, tells us what she loves most about the country she calls home.

After travelling in Nepal, Sam loved the country so much, she decided to stay to become a guide there. She explains: “I had a really strong connection with Nepal from the very beginning.”

Sam subsequently became involved in sustainable and adventure tourism. “In 1999 David Allardice and his Nepali partner Bishnu Neopanae scouted out an area, 100 kilometres north of Kathmandu, with a really deep gorge, and discovered it was a fantastic place to start a bungee company. There was road access on one side but none on the other side with a little farm house and a beautiful plot of land. They bought the plot of land from the farmer and built a 160-metre high suspension bridge over the gorge. That bridge opened up the whole area and changed its whole infrastructure. Now you can do bungee jumping, canyon swinging, canyoning, rafting, mountain biking, trekking and rock climbing there.” 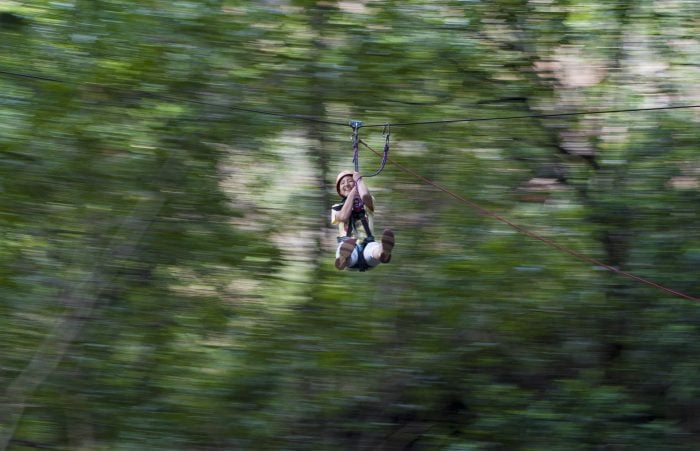 “From the beginning The Last Resort worked closely with the community,” she continues, “It’s a remote area, so there weren’t many jobs except farming, but we gave training to people from the community. The bridge became a big asset, but we also created pathways, water connections, the development of schools, health care and vocational training. We did everything we could to be a good neighbour moving into the area.”

“I was introduced to yoga and I really fell for it; it changed my life.”

Since then, Sam has ventured into running her own yoga studios. “I was introduced to yoga and I really fell for it; it changed my life,” she says passionatley, “I opened up my first yoga studio in the neighbourhood of Patan in Kathmandu, and now we have three Pranamaya yoga studios in Kathmandu and another in Pokhara. From the studios, we started yoga workshops, then day-outs and weekends, and now we organise yoga retreats in Tibetan monasteries, combining yoga with an introduction to Buddhism.”

“Nepal has such a vast array of landscapes, culture, people and languages. It’s a small country when you compare it to its neighbours, but if you travel through Nepal, you’ll have a different experience every day, going from sea-level to 8,800 metres. What I love about the people is that they relate to you directly. They are straightforward, with a sense of humour, and they’re very open and welcoming; I really like that. When I started living in Nepal, the country was still in a period of civil war, but in the last five or six years, they’ve had the peace process. It’s been peaceful for quite a few years, so there’s been a tremendous change. People have this enthusiasm.”

“When you go into the mountains there are a lot of different birds, small mammals like marmots, deer, blue sheep and wild boar, and in some parts of Nepal you’ll see bears. Snow leopards are hard to see but other leopard sightings are regular. When you go down to the south of Nepal, you can see elephants, rhino, bears, deer, crocodiles and lots of birds, with migrating bird species like the Siberian crane.” “The city is old meets new. A lot of Kathmandu is like an open-air museum. On each street, you’ll see temples, shrines and old houses that are all still in use. You can walk past statues that are 1,000 years old, and people are just placing a flower on it or lighting a candle. It’s just a part of their daily life. Early morning they’ll go to a temple, ring a bell, and say thank you for another day. On the other hand, modern life is also here; it’s not like time has stopped. We have iPhones, coffee shops and fancy restaurants, alongside the old bazaars and temples. I think that makes Kathmandu very special.”

“One of my favourite places is Boudhanath, an enormous white stupa, with a walkway around it called a kora where the Tibetan and Sherpa communities walk around each morning. They meet there, do their prayers and walk around the stupa. There are lots of monasteries in that area, with no traffic, so it’s very quiet, as well as beautiful.”

“One of my favourite places is Boudhanath, an enormous white stupa.”

“My other favourite place is Patan Durbar Square. Kathmandu used to consist of three different kingdoms and Patan was one of them. The old palace of the king has been turned into a beautiful museum, with a great exhibition about Hindu and Buddhist art and the history of Kathmandu. It’s done in such a nice way with a fantastic little cafe in an ancient courtyard, while the square in front of it has these pagoda style temples dedicated to the gods.” “January and February is quite cold but very crisp and clear, so the views are beautiful. Then comes March and April, an amazing season to go into the lower mountains because the rhododendrons are flowering everywhere and there’s so much wildlife. Towards May it gets hotter – especially in the south where it reaches 45ºC – just before monsoon, then the monsoon starts towards the end of May; this is a really beautiful time. At this time it’s usually clear in the morning, then it rains in the afternoon, but the good thing is that everything explodes with lushness. The rice terraces and landscape just become so fresh. The rains end in September, then from October, but especially in November and December, it’s the best time for high altitude trekking as the sky is very clear. The nights get a bit colder but the views are fantastic with bright blue skies, crisp air and snowy peaks.”