A three-to-four-hour drive from Rio, there’s a place little known to most travellers in Brazil. Rolling green hills and staggering viewpoints are just some of the wonderful things about Reserva do Ibitipoca, but the real charm is in its altruistic foundations. 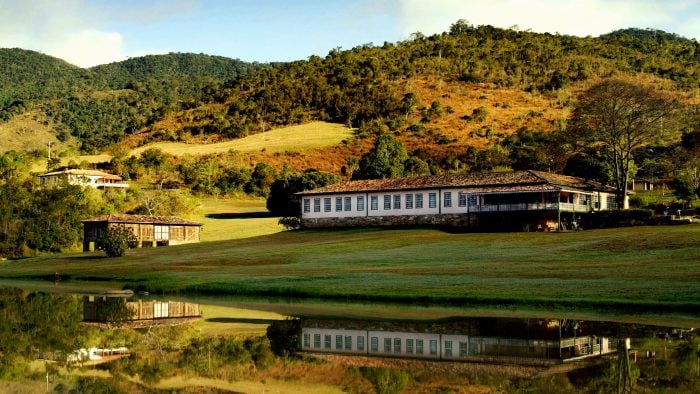 We’d been hiking for a few hours and after climbing up to several staggering viewpoints, we were on our way back down to the lodge. I was lost in my own thoughts and Ciara and our guide Junior were up in front. A few words of their conversation reached me: ‘Burning Man Festival’. I was vaguely wondering how they’d gone from discussing silicon shards in the earth and the oxidation of bark to one of America’s most notorious festivals, when the tree-shrouded path suddenly opened onto a clearing on which was something both fantastic and utterly unexpected. Ciara and I just looked at each other, grinning, and both at an unusual loss for any words other than ‘wow!’

What we found waiting for us around that leafy corner is something Ibitipoca likes to keep as a surprise – and I won’t spoil it.

These little treats and surprises were a regular occurrence during our stay at Reserva do Ibitipoca; each one was considered, charming and served to enhance the reserve’s wholesome vibe, and it’s that positive foundation that marks the retreat from the rest.

It was dark when we arrived, so our first glimpse of the grounds came when we woke up the following morning. Upon opening the green wooden shutters, an idyllic scene was revealed: the farmhouse is located in a grassy valley between undulating, forested hills; tiny birds joyfully flitted around the reed-circled pond and their chirping was the only sound in the morning air. Coming from London, it was bliss. The lodge is an 18th-century Victorian farmhouse with just eight rooms, each named after staff members. Carol, the lovely hospitality coordinator at Ibitipoca, told us that the staff had a secret poll to vote for their hardest-working colleagues, and it was the winners who had the rooms named after them.

The bathrooms have big, stand-alone brass bathtubs and each room features unique artwork, designed for the property. Art is really important here. At dinner on our first evening, we met two artists who were staying at Ibitipoca – not in the main farmhouse, but in the cabins of which there are 20 or so scattered throughout the reserve. One of these cabins is being turned into a ‘living history’ museum; it once housed a family of 13 and still features traditional farming equipment and a loom.

When completed, the artists’ work will be hidden away in the woods and along the trails: more surprises. These are either designed for the property or collected by the owner Renato Machado on his travels, and the aim is that each piece should complement the surroundings. Indeed, one artwork in development was directly inspired by the reserve’s work in restoring the Muriqui monkey population – the largest primate in the Americas and a critically endangered species.

We met Renato over breakfast on our first morning. A businessman from Rio, Renato spends as much time as he can out in the reserve; he jokes that he originally built the posada because he was lonely and wanted company. What we realised during our stay is that his vision is not quite so self-centred. In fact, it’s quite the opposite.

Renato started buying land around the Ibitipoca National Park about 25 years ago for two main purposes: to ‘protect the park and start a private reserve.’ After about 20 years of buying land, Renato decided to ‘build a small hotel to generate jobs for local people.’ He noted that ‘if the community has no jobs, we can’t achieve sustainability.’

Ibitipoca is a community project, designed to provide locals with employment and give them control of their land. Ibitipoca was originally settled after the discovery of gold, but after a short-lived rush – the gold being difficult to extract – most of the settlers left, leaving the remaining population to survive on dairy farming. The industry couldn’t support education and health systems and the ‘slash-and-burn’ practice to clear the Atlantic Rainforest meant that their lifestyle was unsustainable on many levels – and the farmers struggled. Brittany, the environmental coordinator at Ibitipoca, told me that when the previous owner of the Ibitipoca farmhouse was asked if he missed his farm, he said no, ‘because that way of life was like slavery’.

Today Reserva do Ibitipoca is one of the largest and best-paying employers in the region. Every staff member is from the immediate area and the lodge buys locally wherever possible, even when it’s at a higher cost.

When I asked Renato what his vision was for Ibitipoca, his answer was quite simple: ‘a sustainable place to be happy in.’ Renato gives his staff the freedom to implement their ideas and also provides them with English lessons so they can better serve international guests. Everyone is an owner: that’s the line we hear a few times and it’s Renato’s way of not only instilling confidence, but also encouraging staff to take the same responsibility and care that he does. It certainly seems to be working. Huge, genuine smiles are a permanent fixture of Ibitipoca and all members of staff are warm and welcoming, with a real sense of pride in the posada. They’re obviously close, too: Carol told us about a time when the staff furnished and decorated Renato’s new cabin for him as a surprise. The reserve partners with several non-profit companies too, such as Casa Arte de Vida, which nurtures the development of personal, intellectual and social autonomy through arts programmes from music to theatre, and English classes. The reserve bought iPads so students could study at home, and published a book on the native birds and labelled trees in the reserve to further environmental education. Despite the joint ownership values, Renato’s stamp on the property is evident, and not just in the art and antiques he collects for the lodge. He told us that he’d been advised to build a golf course, but he doesn’t like golf. Instead there is a yoga pavilion – which he much prefers – where a variety of other fitness classes are held. We saw the set up for the ‘sling’ massage, where guests are massaged whilst suspended above the bed, creating a sensation of weightlessness. ‘It’s not 50 Shades of Grey,’ Carol assured us as we examined the net of dangling straps and buckles.

We decided to start our first day with a hike.

After trekking up a steep incline, we stopped for refreshment at a little patch of sugar cane by one of the spring-water pumps located around the reserve. Junior pulled out his machete and hacked down some cane, then fed it between two rollers to crush it. Next, he took it over to a wringer that squeezed the liquid out of the cane, before presenting us with the finished result: sugar water – or ‘natural energy’ as Junior put it.

Along the way, William, a guide at Ibitipoca, met us on his electric bike to check we were ok, had enough water, and didn’t want to finish the hike early. The day was hot and had we been a slightly less active pair, it would have been reassuring to know we had the option to head back.

After an hour or so of hiking, the morning sun now beating down hard, we came across a bubbling stream of crisp, clear water. On a rock, just above the miniature waterfalls were two neatly rolled-up bath towels inviting us to take a dip – it felt rude not to.

Finally, we reached the top of the first peak…what a view. The rolling landscape unfurled beneath us, a patchwork of green, gold and yellow. Two swings were fixed into the ground at the edge of the slope, so you could sit and gently swing, admiring the scenery and imbibing the silence.

I also got a little excited to find a ‘loo with a view’ that rivalled the famous thrones of London’s Shard.

After a day of exploring, it’s was a relief to discover that the food at Ibitipoca was delicious. Breakfast and lunch are buffets (the cheese bread, pão de queijo, was the best we had in Brazil, steaming hot and chewy in the middle), but dinner is a four-course set-menu inspired by the French chef under whom Ibitipoca’s head chef, Marly, trained in Rio (something which was organised by Renato. He told us that she came back brimming with confidence, not to mention with many more culinary skills).

On our second day we went for a horse ride. Upon arrival at the stables, I immediately committed riding crime number one and walked straight behind a horse in the yard. Having avoided a broken leg and after being paired to our horses – Ibitipoca keep Mangalarga and Anglo-Arabian horses – and given a quick master-class, we set off. The posada was quiet because everyone had gone to fight the forest fire caused by the previous evening’s lightning storm. Locals have been trained in firefighting (another of the reserves initiatives) and how to protect the environment from the elements; this area of the Minas Gerais state is extremely susceptible to lightning storms, which is a major cause of forest fires. Sadly the other cause, the results of which we saw on our ride, is arson.

We rode along white sand paths, sometimes under the cover of trees, the sunlight dappling the trail, sometimes across a ridge overlooking wonderful scenery. On horseback, without having to watch my footing, I was able to look around and really appreciate the sublime landscape. No wonder the French naturalist Augustin de Saint-Hilaire, who visited the area in 1820, wrote ‘the sight of the beautiful countryside that came to my eye, I could not help but feel a real tightness in my heart, thinking that I must leave it forever.’ For our final dinner, there was one last surprise: the lodge arranged for the dinner table to be set outside on the candlelit terrace where Ciara and I dined with the other two guests, and afterwards Vivi, our waitress for the evening, sat down with her guitar and sang songs for the four of us.

The next morning we left the reserve with a spring in our step; I defy even the most cynical of travellers to feel unaffected by the unashamedly feel-good vibes of Ibitipoca. For those suffering from the day-to-day stress of life in the concrete jungle, Ibitipoca’s charming staff, heartening community focus, and the spectacularly beautiful landscape of the reserve combine to create a little haven of positivity – just ripe for visiting.