The quickest and most enjoyable way to get to grips with the many sights in Cambodia’s capital is travelling by cyclo, a luxuriously comfortable carriage powered by a man peddling furiously behind you, while you sit back and take in the sights. We took the two-and-a-half-hour guided historic city tour, accompanied by an enthusiastic young architecture student who collected us from our hotel, Raffles Le Royal, the recently restored French colonial gem.

Our guide took us all over the city: to a derelict building that had once been a police station, to a hotel that is now a KFC and a post office that is still a post office, its original trappings of grandeur more or less intact. We stopped off at a garishly colourful Chinese Taoist temple too, and several other buildings, his fascinating stories bringing everything richly to life.

We ended our ride at the Central Market. Built in 1937 and restored four years ago, this is where textiles and fake gemstone sellers compete for your dollar next to stalls piled high with crunchy protein-rich insects, crayfish, dried prawns, pink eggs, and people crammed cheek by jowl at counters, heads down, eating bowls of noodle soup. We joined in the fun, sampling a strange gummy mixture of banana and rice paste that came rolled up in banana leaves and fresh pancakes made in front of us, filled with shredded chicken and vegetables. The smells of rotting fish and aromatic spices, of lemongrass and coconut, of hot and sour and sweet, were all mixed up like nothing I’ve ever smelt before, simultaneously delicious and disgusting. 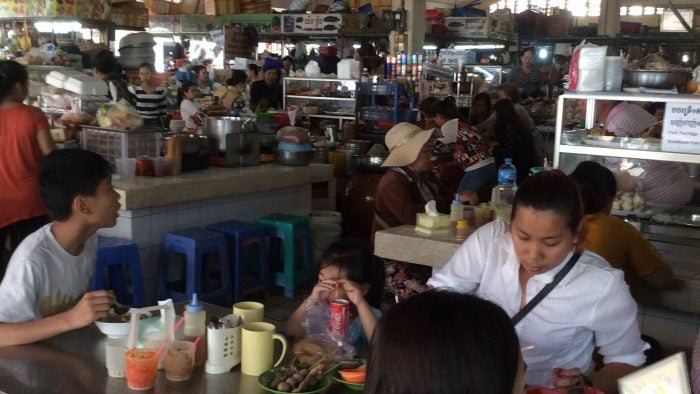 Other must-see sights included the Royal Palace, a series of palatial 19th-century buildings, including one with a silver tiled floor, set in perfectly manicured grounds. Vitrine cases contained Buddhas of every size, made of gold, emerald and silver, encrusted with precious gems or carved out of stone and wood. For aficionados of Khmer art, the National Museum is the place to go. We sat in its central courtyard, almost its only visitors, enjoying the sight of water lilies growing in ponds, surrounded by extraordinary, ancient Khmer sculptures.

Inevitably our time in Phnom Penh also had to include a visit to the Killing Fields memorial at Choeung Ek, half an hour’s drive to the capital’s outskirts, where the Khmer Rouge executed thousands of Cambodians between 1975 and 1979. From there we went on to the Tuol Sleng genocide museum, originally built as a school and used by the Khmer Rouge as a prison. Our guide welled up as he told us that his own father – who’d had the misfortune to speak several languages – was sent here to be ‘re-educated’ and was never seen again. Two million Cambodians – almost a quarter of its population – died. Today, 50% of the population is 18 or under and to see a middle-aged, let alone an old person, is unusual. And yet, for all the horrors of the past, Phnom Penh is a thrilling city, with a palpable energy and vitality about it, and a sense that it is celebrating its regeneration.