From sushi to samba and caipirinhas to cathedrals, here is how we filled three days in Brazil’s sleekest, sexiest and most cinematic city: Rio de Janeiro. We arrived at Felipe and Isabela’s Botanical Garden apartment in the evening, where the ice was immediately broken with a caipirinha masterclass.

Although the ingredients of Brazil’s signature cocktail are very simple – cachaça (Brazil’s national spirit made from fermented sugar cane juice), sugar and limes – the key to a great caipirinha is all in the preparation, from how the limes are cut to how firmly they are crushed. What trip to Brazil would be complete without mastering the perfect caipirinha? I was pretty pleased with my efforts – and having sampled the offerings at every restaurant, bar and hotel that I’d entered during my time in Brazil, I felt I was in an ideal position to judge.

Dinner was a traditional Brazilian dish, muqueca. This is a Bahian stew of fish and seafood with peppers, tomatoes, coconut oil and dende oil. As that was all bubbling away, we learnt how to make farofa, another Brazilian dish made with manioc flour and onions; this was served with the muqueca, lending a different texture to the dish.

For dessert, we made delicious guava soufflés, and washed it all down with surprisingly tasty Brazilian wine – a market on the up.

Our dinner was served out on Felipe and Isabela’s terrace, overlooked by the illuminated Christ the Redeemer statue, perched atop the dark silhouette of Corcovado mountain. If there’s one easy way to soak up the sights, smells and tastes of Brazil, it’s this. If you plan to delve into Rio’s nightlife scene, you should make sure to schedule a samba class. As one of the many things unique to Brazil in Latin America, simply learning a few basic samba steps will make a difference to your enjoyment and participation in a night out.

We went to a great little class in the downtown area of Rio to learn a few of the steps with a professional dancer who put us through our paces and didn’t laugh at my two left feet (much).

If you want to hit the ground dancing, learn some steps at home. One of the best ways to see the famous beaches of Ipanema and Copacabana is by bicycle.

Rio has an excellent cycling path running alongside its beaches. With two lanes and a curb separating it from the main road, you can happily people-watch as you cycle along without fear of being knocked over by boisterous drivers.

We took a tour around the beaches and the manmade lagoon, which was a great way to get out and about with the locals – from toned, tanned joggers to wrinkly old men parading around in speedos.

Rather bizarrely, our guide turned out to be the former Latin America CEO of GlaxoSmithKline, the pharmaceutical giant, now retired and enjoying showing visitors his home city of Rio de Janeiro.

Naturally this 130-foot statue will be on everyone’s list of things to see in Rio, but what makes the difference is how you experience it.

Topping my list is a sunrise picnic breakfast before the area opens to the public. Well worth the early start, the statue is usually heaving with tourists, so take full advantage of the opportunity to have it all to yourself as you watch the sun rise up over the city.

Another ‘must do’ when in Rio, Sugar Loaf Mountain is best visited just before sunset.

Catch the cable car up to the peak in the late afternoon, revealing the city and the harbour in all its undulating finery. After taking in the view during daylight hours, you can watch the sun slip behind the famous Cristo Redentor statue.

I find that all sunsets are perfectly complimented by cocktails, and this one is no different. Pitch up early at the lookout spot (facing the Christ statue) to secure the best vantage point. Rio’s cathedral is bound to be unlike any you’ve ever seen before and is quite unexpected for such a traditionally Catholic country.

The cathedral was built between 1964 and 1979 and designed by Edgar Fonseca. Resembling a Mayan pyramid, the cathedral is conical in shape and a towering 75 metres in height. Inside, there’s a brief nod to convention with stained glass window panels that meet in a cross at top of the pyramid. Tear yourself away from the beaches to discover a different side of Rio. Santa Teresa is based up in the hills of the city; artistic graffiti colours the walls and the steep, narrow streets are cobbled and winding, with tram tracks running along the old roads (the famous yellow tram was out of action when we visited).

There are some great little shops to explore, live music venues, and lots of artists’ studios, but the abundant graffiti (which is legal) is an interesting, accessible glimpse into the current mindset of Brazilians and cariocas. One of Rio’s most popular restaurants, Sushi Leblon did not disappoint. We sat at the bar, which encircles the open kitchen. It was wonderful watching the chefs create the sushi in front of us, slicing the fish, rolling the rice, blow-torching toppings, spooning on glistening caviar, and piling sashimi and rolls onto platters of sizes that varied from large to enormous. The salmon in particular was melt-in-the-mouth delicious.

If you’re not staying at the Copacabana, then it’s a good idea to stop by for lunch simply to sample the flavour of this world-famous, historic and iconic hotel. We had lunch by the pool and indulged in the enormous buffet of fresh vegetables, salads, rice, pasta, meat and an array of desserts. Ciara had a bit of a love affair with the flan. This cherubically-themed restaurant sits heaven-high in Santa Teresa, with stunning views of Rio stretching out beneath it. Aim to secure a table as close to the view as possible; the main restaurant is open-air, which makes the most of its enviable vantage point.

The cuisine is Brazilian, but with a modern touch: grilled fish with an orange sauce, served with coconut and cashew rice and baked plantain; lamb shoulder with crunchy sweet potato, red cabbage preserve, green apple and raisons; and for dessert, mango slices infused with lemongrass and served on fudge rolls with mango ice-cream and mango coulis.

The food was fantastic, but it’s the views that really sell it. 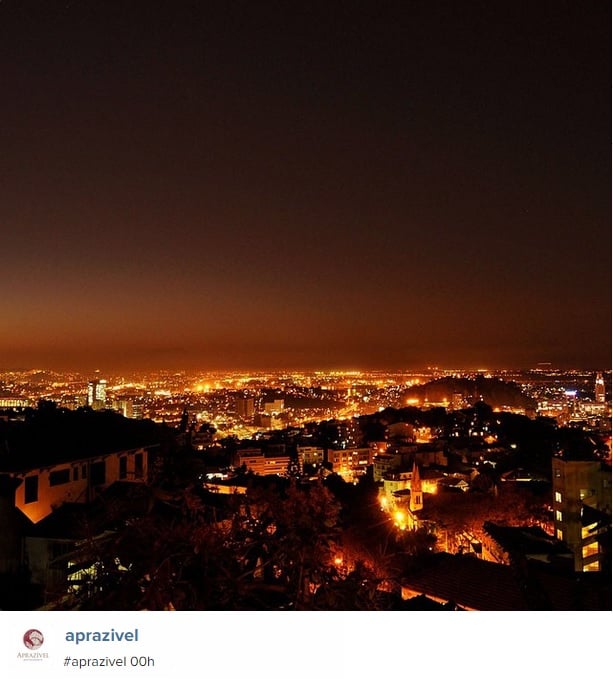 A last-minute find, we discovered Espirito Santa on our final day in Rio. If you want real Brazilian cuisine, this is your type of restaurant.

In the hilltop neighbourhood of Santa Teresa, Espirito Santa is quirkily decorated with bright colours and artworks. Whilst it’s not particularly fancy, it does have an authentic air to it, something enhanced by Chef Natacha Fink’s food.

The Amazonas-born chef presents dishes such as frigideira de camarão (shrimp marinated in herbs and cachaça, cooked in coconut milk, and then served on thinly sliced potatoes and leeks with a puree of sweet potato, manioc and cream cheese) and frango Santa Teresa (chicken breast marinated in passion fruit juice, seasoned with herbs, then served with coconut rice – which was absolutely delicious – and vegetables). Sipping a cocktail by the sleek rooftop pool of the Fasano is a pretty perfect way to spend a sunny afternoon and, later, to watch the sun set.

Come the evening, the warmly lit Baretto-Londra is a lively place for a few drinks. The London-themed bar was designed by Philippe Starck and styled in honour of Rogério Fasano’s favourite city.  The décor features a Union Jack flag (in Italian colours) draped across the wall, brown and black leather armchairs, Fasano’s own vinyls on the wall and a mirrored bar.

We arrived back at the hotel earlier than planned one night and fancied a couple of drinks before bed, but it would be a good place to kick off a night out, too. The crowd seemed to be a mixture of well-to-do locals and Americans. Continuing with my mission to sample a caipirinha in each place we visited (someone’s got to do it), I can confirm the Fasano had an excellent offering. Based in Lapa (the central district known for its iconic white arches, pastel-shaded colonial façades and cool bars), Rio Scenarium is one of the most famous samba and live music bars in the world, so it’s a fair bet that you’ll be heading here at some point during your time in Rio.

Inside the three-floor building, each wall has something interesting featured on it: one surface is an eruption of expanded umbrellas; another wall is covered in shiny, brass musical instruments.

The best part about this quirky bar is that it’s not just tourists who frequent it. As we sipped our caipirinhas, we watched a local pair dance across the floor to the live music. After they’d bowed out, other couples piled in, too. At this point you can try out some of your own moves, with a carioca for guidance.

From the décor to the dancers, Rio Scenarium is a real feast for the eyes. A little less touristy than Rio Scenarium, Carioca da Gema is a small, intimate and long-standing samba bar in Lapa. We went after being told that it had some of the best live samba music in Rio, and was one of the more traditional bars in the city.

The vibe was relaxed and fun. The floor was full of Brazilian groups and couples, with a smattering of tourists enjoying the music. We propped up the bar, people-watching and listening to the live band whilst sipping on what seemed like buckets of caipirinhas.

The Fasano is Ipanema’s chicest hotel, famed – rightfully so – for its guests-only sexy rooftop pool. I liked it so much I made a point of spending every spare minute I had up here, enjoying the odd lychee martini or two.

A Philippe Starck-designed hotel, the look is bold and modern with Starck’s signature quirky twist interwoven throughout the property: our dark-wood corridor is dimly lit with a single enormous red and white armchair illuminated in the middle; there is a small, misshapen mirror on the ceiling above our bed; and the shower has a glass window that looks into the bedroom. Our second hotel in Rio was the beautiful Hotel Santa Teresa, in – unsurprisingly – Santa Teresa. The Relais & Châteaux hotel has stunning views across the city and is tucked away in a little leafy spot that is the perfect place to chill out and seek some respite from this busy city.

The rooms are large, airy and comfortable, with chunky wooden furniture, huge full-length mirrors propped against the walls, and four-poster beds.