Under the Ice: What it’s Like to Dive in the Arctic

Plunge into Arctic waters to explore the ethereal world that’s under the ice. Wildlife cameraman and experienced ice diver Doug Allan tells us of whistling beluga whales and water as clear as gin.

The thought of scuba diving in Arctic waters doesn’t appeal to everyone, but for those yearning to explore hidden corners of our planet, ice diving is the ultimate experience of a lifetime. And, while the activity is subject to previous dive experience, it can be incorporated into a trip to the polar regions, from Norway or Canada’s Arctic waters, or by travelling south to Antarctica.

Wildlife and documentary cameraman Doug Allan is known for the extraordinary underwater footage he’s captured and for his wealth of experience in the polar regions, having worked as a research diver for the British Antarctic Survey, filmed for documentaries such as Blue Planet, Life and Frozen Planet, and having filmed and presented the BBC series Ocean Greats as well as Operation Iceberg.

With so many hours under his ice diving belt, Doug explains what it is that he finds so alluring. “There’s always been a physical element to what I’ve liked doing and extreme conditions make for high emotions. And under ice is so very special, the lighting, the shafts of sunlight coming down through the cracks, the quiet because there’s no swell under there, often the sounds of seals or whales in the far off distance. It’s just a peacefully exciting place to feel at home.” Diving in the polar regions affords close encounters with some extraordinary marine life, from Beluga whales and pods of narwhal in the Arctic to diving emperor penguins in Antarctica. An especially memorable wildlife encounter for Doug was in the Canadian Arctic: “I was diving on the edge of the ice in Lancaster Sound and spent a wonderful hour in the company of 30 or so Beluga whales,” he enthuses, “Even with good visibility, I could hear them squeaking and whistling to each other long before I saw them. And when they did first approach, it was the classic curious but wary behaviour of whales. They came in from behind me, dived down, and rolled on their backs directly underneath me, looking up at my silhouette against the bright surface. The water was full of their noises; so loud was their chirping, it was like being in the middle of a flock of birds. It was flat and calm on the surface, so I could just lie there and let them come closer until they were swimming just a couple of metres from me.”

“I could hear them squeaking and whistling to each other long before I saw them. And when they did first approach, it was the classic curious but wary behaviour of whales.”

Of course, ice diving doesn’t come without its challenges, of which overcoming the cold is perhaps the most demanding. Doug’s advice is to first become accustomed to drysuit diving. “Make yourself fully acquainted with drysuit diving and put in a lot of dives,” he says, “Practise with three fingered mitts and a full hood to get accustomed to the clumsiness you’ll feel, and expect to get cold as no matter what gear you wear, you won’t be as comfortable as diving in warmer water.” Staying warm up until you hit the water will reap its rewards. “If you’re cold when you start then you’ll chill down much faster,” he explains, “Give yourself four times as long between dives to warm-up as you spent underwater for the dive, so if you dive for 45 minutes, get yourself somewhere warm and dry, then allow three hours before you try for your next dive.”

Once mastered, ice diving is a rare and privileged gateway to experiencing a part of the world that so few people see. Above all others the ice diving experience that stood out for Doug was filming the BBC series Life in Antarctica.

“I went down to McMurdo station in mid-October. The ice is four metres thick but underneath it, the visibility is wonderful. Gloomy yes, but horizontally you can see 250 metres with gin clear water, under ice topography with jumbles of electric blue pressure ridges sloping into the depths, and no currents or swell. So you had this wonderful feeling of space, you could hear the Weddell seals calling in the distance and approach them as they swam near their breathing holes with their pups who were learning to swim.”

Where to do it

With sufficient experience, ice diving can be experienced on a trip to the Arctic regions and Antarctica.

In the High Arctic, between mainland Canada and the Nunuvut region’s largest island of Baffin lies the small island Igloolik – the oldest Inuit community in Canada. From Baffin Island or Igloolik set out on boat trips and kayak across the Arctic waters to get up close to the wildlife that passes through. Bowhead and beluga whales, walruses, seals and narwhals can all be seen as the ice melts during the summer months. As icebergs drift by, begin diving in an open water environment before progressing on to diving in jumbled pack ice, then finally enter the water through a seal hole or crack in the sea ice.

WHEN TO GO April to October

The Svalbard archipelago is situated midway between Norway and the North Pole, making it the ideal base for exploring the Arctic waters. Stay on the archipelago’s only inhabited island Spitsbergen, then venture out on excursions into the surroundings. From here, scuba diving trips can be organised for the chance to see seabirds, seals, narwhal and beluga, as well as walruses. While you’re there, stay on a ship that’s been frozen into the ice, at a hotel that used to be the original radio station or at an old trapper’s station that’s been turned into a cosy lodge.

WHEN TO GO April to October 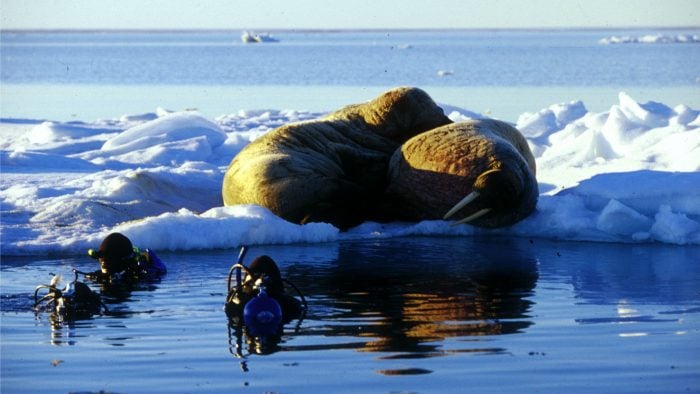 Incorporate polar diving into a cruise of Antarctica. M/V Plancius is one vessel that’s affords this opportunity. Under the ice, the Antarctic waters are home to unique marine life including sea butterflies and giant isopods, as well as larger marine species such as fur seals, leopard seals, penguins and whales.

WHEN TO GO The Austral summer months, from December to February.

Advanced diver certification is necessary for ice diving expeditions, while drysuit certification is recommended. In Antarctica, experience in drysuit and cold water diving is a prerequisite.