Discovering the Island of Chiloé

As you travel south through Chile, the deserts cede to fertile wine-growing regions, then to forests, and finally to glaciers. The first stop in southern archipelagic Chile is La Isla Grande de Chiloé, the country’s second largest island after Tierra del Fuego. Approaching Chiloé by ferry across the Strait of Chacao on a foggy day, you can’t see land at all until the island suddenly appears out of the mist. Chiloé’s virtues spring from this deep isolation.

Chiloé is known for its distinct culture, a syncretic blend of Spanish and indigenous Latin American elements, which developed in the solitude that still pervades the island. A diverse agricultural system still exists, recognised by the Food and Agriculture Organisation’s designation of Chiloé as a ‘Globally Important Agricultural Heritage System’. Many of the island’s 150 churches are UNESCO World Heritage Sites, admired for their unique fusion of Spanish and indigenous building styles, use of local materials, and colourful interiors. The churches were generally constructed on hills facing the sea as part of a circular missionary circuit, both visible to sailors and safe from flooding. Missionaries would visit for a few days a year, leaving a layman in charge of the church as well as the spiritual tending of surrounding residents, resulting in a blend of indigenous and Catholic beliefs and practices. Many of Chiloé’s houses are similarly distinctive in style, covered with tejuelas, wooden shingles, held together by pegs of wood. There are also many remaining palafitos along the coast, brightly coloured shacks built on stilts above the water. In its isolation, the island also developed a unique dish, curanto, made by piling shellfish on top of hot stones in the bottom of a pit, followed by layers of meat, potatoes, vegetables and fish. The layers are then interspersed with nalca (Chilean rhubarb), after which the pit is covered by dirt and grass. Curanto is available elsewhere in Chile, but it is usually just cooked in a pot, rather than underground. This style of cooking is believed to have originated with the indigenous settlers; the remains of 6,000-year-old curanto cooking sites have been discovered in the area. There are only two principal towns in Chiloé: Castro, the capital, and Ancud. Both are pleasant and quiet cities. Castro is the third oldest continuously inhabited city in Chile, founded by Spanish settlers in 1567. The island’s principal port is in Ancud; be sure to visit a marisqueria here, one of the casual seafood restaurants where your dinner was likely caught just an hour or two ago. Chiloé’s interior is also well worth a visit, ranging from the temperate rainforests of the Parque Nacional Chiloé on the western side of the island to the wetlands of the Valle de Chepu for kayaking. North of Castro on the eastern side are small, traditional villages where, if you’re lucky, you’ll find an authentic curanto. 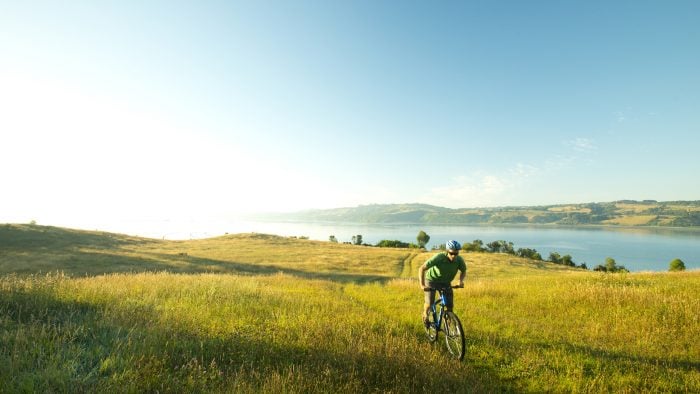 Air travel to the island only began in 2012.  While Chiloé’s churches, villages and cuisine are undeniably unique, the principal reason to visit Chiloé is harder to describe. Its appeal lies in it being so far off the beaten path, isolated by water. And the island is just a starting point for southern Chile; beyond the mist and endless water, there lies the brilliant blue fjords of the Aysén region and the jagged peaks of Torres del Paine. Crossing the water upon leaving Chiloé, you’ll long to continue that southwards journey.