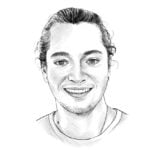 My passion for travel came from early on in my life, knowing there was something more out there than my small town in the drizzly north of England. Watching my childhood heroes of Steve Irwin and David Attenborough from a young age, I became fascinated with nature and wildlife, which spurred me on to explore this wonderfully diverse planet as soon as I could.

I’ve been lucky enough to have travelled to a lot of incredible places in my life. I’ve never been one to shy away from something new, be that trying a local delicacy of Balut (google it!) in a small village in the Philippines with no electricity, to trying to keep up with the locals dancing the night away in Rio de Janeiro during Carnival. Travelling is something that has taught me more about the world than any book or class ever could have. No country had more of an effect on me than Australia.

After finishing university, I set off to Australia for one year to immerse myself in a new lifestyle, a new culture and new experiences. Little did I know that the next time I would return to the UK would be three years later, with a better tan and a new found love for a place I now consider my true home. From the blindingly, white beaches of the Whitsundays to the vast, luscious tropics of the Daintree Rainforest, Australia is a country that truly has something for everyone.

Living and working in Australia also gave me the incredible opportunity to visit its closest neighbour: New Zealand. Nothing can prepare you for the most friendly, welcoming people that live in the land of the long white cloud, and the same can be said for the most breathtaking landscapes you will ever see. The true beauty of nature can be seen around every corner in New Zealand, be that the snow-capped peaks of The Remarkables, surrounding the glass-like Lake Wakatipu in Queenstown, to the commonly named eighth Wonder of the World, Milford Sound, which makes you feel like you’ve just been transported back in time to the Jurassic era. The true beauty of Australia and New Zealand is unparalleled.

Ask me about swimming with wild dolphins in Kaikoura, New Zealand, or cage-diving with great white sharks in Port Lincoln, South Australia.

Reasons to Visit Australia in Winter

See where Levi has travelled

Do you want to join our growing team of travel design experts? Find out more about any available roles or how to send us your details for consideration.